The Long Delayed "Fight 7500" Makes its Landing on DVD 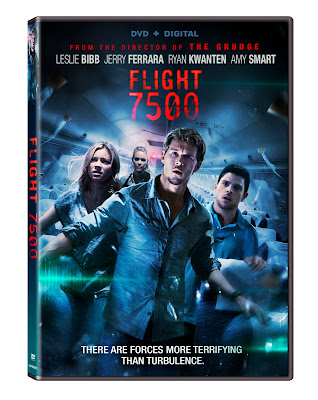 Special features on the DVD includes "Inside Flight 7500".

The friendly skies take a dark turn in Flight 7500, arriving on DVD (plus Digital) and Digital HD on April 12 from Lionsgate. Following the violent death of a traveling businessman, his fellow passengers begin to investigate the cause, one that could be based in the supernatural. From the director of The Grudge and the producer of The Ring, Flight 7500 stars Leslie Bibb, Jamie Chung, Jerry Ferrara, Ryan Kwanten, Johnathon Schaech, and Amy Smart. Featuring a look behind the scenes at the making of the film (the “Inside Flight 7500” featurette), Flight 7500 will be available on DVD + Digital for the suggested retail price of $19.98

From the director of The Grudge comes this spine-chilling journey into fear. On a flight from Los Angeles to Tokyo, a plane is shaken by severe weather. When the turbulence subsides, a passenger suddenly dies — and a supernatural force is unleashed, overtaking the passengers as they desperately fight to figure out what it is and how to stop it.
at 9:01 AM
Labels: DVD News, Flight 7500, Lionsgate