"Pride and Prejudice and Zombies" Review by Tim Hellman 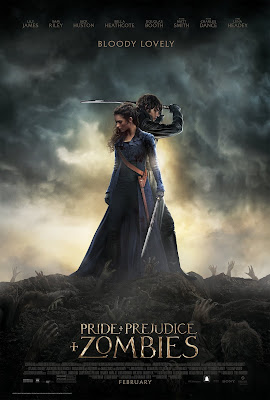 'PRIDE AND PREJUDICE AND ZOMBIES': Four Stars (Out of Five)

A zombie rom-com horror flick; based on the 2009 novel, of the same name, by Seth Grahame-Smith. The movie, like the book, spoofs the classic 1813 novel 'Pride and Prejudice', by Jane Austin. This story deals with five sisters, in 19th century England, struggling to find wealthy husbands; as well as defend their home, from vicious zombies. It was written and directed by Burr Steers (who also helmed the 2002 indie cult classic 'IGBY GOES DOWN'), and it was co-produced by Natalie Portman (who was originally set to star in the film). The movie stars Lily James, Sam Riley, Bella Heathcote, Jack Huston, Sally Phillips, Charles Dance, Douglas Booth, Matt Smith and Lena Headey. I found it to be a most enjoyable filmgoing experience.

The film is set in 19th century England; where an outbreak, of a deadly zombie virus, has consumed most of the land. Mr. Bennet (Dance) has raised his five daughters to defend themselves; from the bloodthirsty creatures. While Mrs. Bennet (Phillips) just wants her daughters to marry wealthy businessmen. To her delight, the rich Bingley family moves in next door. Elizabeth (James) and Jane Bennet (Heathcote), look like they've found ideal suitors; but zombies threaten to spoil everything.

The movie is surprisingly hilarious, that's what I most enjoyed about it; it's full of witty humor and clever dialogue. The performances are all decent as well; especially Lily James, in the lead. The action, and zombie gore, leaves something to be desired though; and the horror elements, of the film, are actually where the film falls short, surprisingly (maybe partially because it was made for a PG-13 audience). It's still a lot of fun though, and sure to become a beloved cult classic!
at 4:59 PM
Labels: Lilly James, Matt Smith, Pride and Prejudice and Zombies, Reviews, Sony Pictures