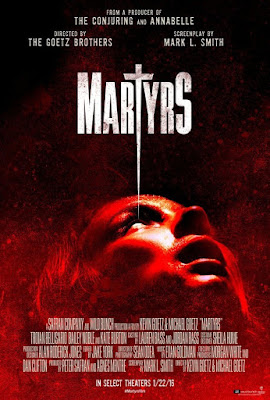 When I first heard that when the remake of “Martyrs”, I wasn’t thrilled about the news. The original was very good plus I wouldn’t have think that a U.S. remake would be possible given the film subject matter in general. But here we are, they have remade this film too. What’s next a remake of another great foreign horror film or another remake of a horror classic that I enjoy? Let’s get back to the film in hand, as that’s another subject for another time.

The film is about a woman named Lucie (Troian Bellsario) who is haunted over the traumatic events that led to her kidnapping ten years ago. The only time she feels safe is when she’s with her friend Anna (Bailey Noble). As the events still torment her to this day, she and Anna go looking for the people who took her. But when they get closer to the truth, they become trapped in a sadistically nightmare where escape maybe impossible.

Going into this film, I was wondering if the film would follow the same style as the original did. When I finished seeing this film, the tone and the intensity felt the same but the screenplay felt different and the scenes felt watered down. Still, this version of “Martyrs” is a very good film.

One of the things that makes this good was its direction. Michael and Kevin Goetz does a very good job making sure the film had the same feel as the original. Whether it’s the way that the action scenes were directed to how the scenes looked, everything moved at a good pace and had a level of intensity that kept my interested. The other thing that I liked about the directing was the fact that the lead performances were good. The Goetz brothers made sure the performances and chemistry between the main actresses work very well within the film’s context. It made the performances very good and helped move the story along. Speaking of the performances both Troian Bellsario (Pretty White Liars) and Bailey Noble (True Blood) were very good here. I liked how they made their characters interesting throughout. Both of them took their time to make sure that their performances were engaging and making the relationship between their characters work so well considering the film is very dark. It’s one of the best things about this film along with its direction.

The screenplay written by Mark L. Smith felt different but it was still good. What made this screenplay good was the fact that it had the same level of dread that the original had. It helped made the horror aspects work very well and made the story interesting. The other thing that makes this screenplay good was the level of action that this film has. Smith made sure those scenes have a level of intensity that was able to keep me interested. It felt like there was more action in this film than the original which I liked. The only drawback that I have with this screenplay was that it felt like it was watered down as the scenes weren’t as out of control like the original. Still, I liked this film a lot.

“Martyrs: An Inside Look” is the only featurette on the disc. The featurette features interviews from the main cast and crew. It’s very brief as clocks in over eight minutes. I would’ve liked it if it went a little more in depth besides the interviews but this is the standard fare for this type of release.

Even though this version of “Martyrs” feels watered down, this was a very good film. With its very good direction from Kevin and Michael Goetz and excellent performances from Troian Bellsario and Bailey Noble, “Marytrs” is an intense film from start to finish.