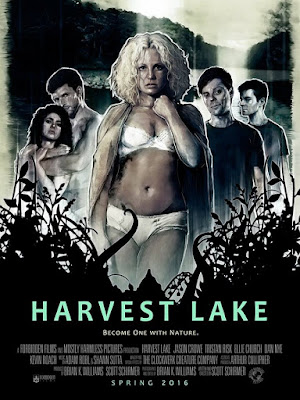 “Harvest Lake” is the latest film from director Scott Schirmer, who directed the excellent film “Found” back in 2014 and produced the ultra-gory film “Headless” which was released last year. This film boasts an excellent cast that includes Elle Church (Headless), Tristan Risk (American Mary, The Editor) and Kevin Roach (The Confession of Fred Krueger).

The film is about five friends who go vacationing in the woods. They are hoping to have fun and have a good time. But something is lurking in the woods, as they feel like they’re under the spell of someone or something. Soon their behavior starts to become erratic and having strange feelings towards each other as they try to find out what is happening to them. Can they find out what’s the cause of their strange behavior before they become lost in woods forever? This was the first film that I didn’t know what to think about the sex scenes as they felt very horrifying and different in tone. It was something where you couldn’t take your eyes off because of the horrific nature and the level of despair that it represents. That’s what makes “Harvest Lake” a very interesting and entertaining sci-fi horror film.

One of the things that makes this very good was the way director/writer Scott Schirmer directs the action. Everything had a dark and uncomfortable feel to it. Whether it was the film’s beginning and end to some of the dialogue scenes, everything had a dark and creepy presence. Those scenes were created and directed well enough to have a sense of dread to them as it’s the first film where the sexual encounter felt like it had a gloomy and eerie feel to them. It also helped that the cinematography was very good as it added to what Schirmer achieves. The other thing that he does very well is to make sure the performances work. I liked how he handles each of the film’s performance. They fit the film’s tone very well that it keeps you interested in what’s happening. It’s important for a film like this to have it, as it’s more focused on tone than action.

Speaking of the performance, they were good here. The cast that includes Elle Church, Tristen Risk, Kevin Roach and Dan Nye did a very good job with the way that they each approached their characters. It helped especially with all the dialogue scenes in the middle of the film. The performances kept me interested with the material especially when it sets up the third act.

The screenplay written by Schirmer does a very good job with making the film’s tone very dark and gloomy. He approaches each of the film’s scenes with importance as everything including the sex scenes felt very dark as this has a very different feel compared to other alien films where there’s a lot of action and intense scenes. Instead, none of that is present as it focuses more on the story’s darker elements. The other thing that I liked about Schirmer’s screenplay was the fact it focuses on the characters and story at hand. He spends a good time developing the film’s story and characters making sure that those elements are the focus of film. If that didn’t happen, this would’ve been boring. Thankfully, it wasn’t the case as this was a very good alien film.

Check this film out when it comes when it hits a film festival or DVD and Blu-Ray, as this is a great alien film. With it great direction and chilling screenplay, “Harvest Lake” is terrifying alien film that make you think about having sex again.

For more information on this film, you can visit the film's official Facebook at:  https://www.facebook.com/harvestlakemovie
at 5:58 PM
Labels: Forbidden Films, Harvest Lake, Reviews