Get Ready to Ride into Hell with "All Hell Breaks Loose" 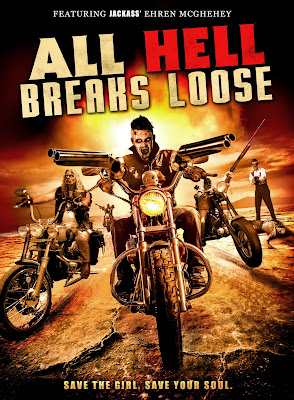 Special features on the DVD include  commentary with director Jeremy Garner and deleted scenes.

Wild Eye Releasing is revving up for the March 22nd DVD and Digital HD release of Jeremy Garner's All Hell Breaks Loose. Featuring Ehren McGhehey (Jackass, Portlandia) and Casey Vann (Grimm), All Hell Breaks Loose combines classic elements of exploitation cinema: bikers, Satanism and gritty action. A murdered groom tries to save his wife's soul with the help of the local sheriff, a priest, and a cowboy who just might be God.

A story of love, leather ... and brutal violence! When the Satan's Sinners, a vicious biker gang, attack a bride and groom on their wedding day, they get a fight they never imagined. Now, armed with some divine intervention and firepower, the murdered groom is out to save his wife any way he can before she is sacrificed to Satan... even if it means dying over and over again until the job is done.