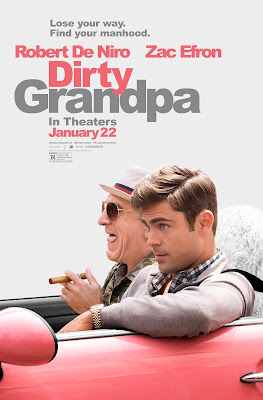 Raunchy comedy flick, about a conservative (and extremely uptight) lawyer; who's tricked into driving his sex-crazed grandfather to Florida, for spring break. The movie stars Robert De Niro and Zac Efron, as the two leads; and it costars Zoey Deutch, Aubrey Plaza, Julianne Hough and Dermot Mulroney. It was written by John M. Philips, and directed by Dan Mazer (a veteran writer/director of the TV series 'DA ALI G SHOW'). The film is filthy, and very offensive (at times), but it's also hilarious!

Jason Kelly (Efron) attends his grandmother's funeral, a little over a week before his wedding. At the funeral, his grandpa, Dick Kelly (De Niro), asks him for a ride to Florida; the following day. Jason reluctantly agrees, much to the disappointment of his very domineering fiancé (Hough). Once the two get on the road, Jason discovers his grandfather really just wants to party; and have lots of sex. Jason slowly begins to come out of his shell, and grow into another person; in the process (of course).

The movie has been pretty successful at the Box Office (it's made $63 million, on an $11 million budget), and viewers mostly seem to really like it. Despite this, it's been slammed by critics. I often question the validity of modern critics, these days, but especially when it comes to comedy; you can never trust an average critic's opinion on comedy (they just don't understand humor). Especially not when it comes to raunchy slapstick, like this. The script is brilliant (it was listed in the 2011 Black List!); it's also lead to it's writer being hired on to co-script 'BAD SANTA 2' (he seems perfect for that)! The performances are all great (especially De Niro, who's having a great comeback recently) and Jason Mantzoukas (in a hilarious supporting role). The only place the film is really lacking, is direction; but this film doesn't need 'top quality' for that. It's a very funny movie!
at 10:05 AM
Labels: Aubrey Plaza, Dirty Grandpa, Lionsgate, Reviews, Robert De Niro, Zac Efron