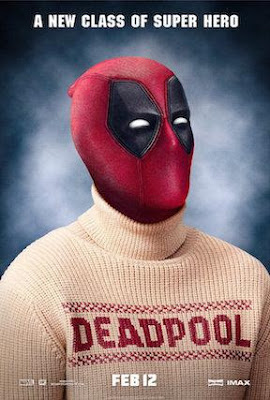 'DEADPOOL': Five Stars (Out of Five)

A raunchy, and excessively violent, superhero comedy flick; based on the Marvel Comics character (of the same name). The film stars Ryan Reynolds; playing a very different version of the role, than he previously did (in 2009's 'X-MEN ORIGINS: WOLVERINE'). Reynolds plays a mercenary, named Wade Wilson, who's subjected to a secret experiment (to cure his cancer); which gives him superhuman healing powers, but it also leaves him severely scarred. The movie also stars Morena Baccarin, Ed Skrein, T.J. Miller, Gina Carano, Brianna Hildebrand and the voice of Stefan Kapicic (as Colossus). It was directed by first time feature filmmaker Tim Miller; and written by Rhett Reese and Paul Wernick (based on the comic book character, created by Rob Liefeld and Fabian Nicieza). The film scored the biggest R-rated opening of all-time, at the Box-Office (grossing $150 million, in 4 days); making it (also) one of the largest superhero film debuts, ever (beating the likes of 'SPIDER-MAN', 'BATMAN','SUPERMAN', 'IRON MAN' and more)!

Wade Wilson (Reynolds) is a former Special Forces operative, turned mercenary for hire, who suddenly falls in love with a beautiful escort, named Vanessa Carlysle (Baccarin); after meeting her at a local New York City bar. Then he's tragically diagnosed with terminal cancer. A mysterious recruiter (Jed Rees), for a special program, approaches Wade (at the bar he frequents); and offers him a cure for cancer (in exchange for his involvement in the program). Wislon reluctantly accepts his proposal; but the program not only cures him of his deadly disease, but it mutates him into a scarred, and somewhat psychotic, superhero, as well (with the nickname Deadpool). Deadpool will stop at nothing to get revenge, on the people that mutated him, and (hopefully) fix his disfigured face; so he can go home to Vanessa, again.

The movie is the perfect combination of action and comedy; It's a hilarious (fourth wall breaking) spoof, and the action scenes are spectacular (and thrilling) as well. The special effects aren't bad either. I'd give it 5 stars, in both genres; which I never really thought was possible, before now. Reynolds is perfect, as the popular antihero; and it's such a redeeming, faithful adaptation (this time around). The writing is brilliant, and the directing is equally impressive (from a debut filmmaker even). The movie also has great social commentary, on most people's obsession with looks, in our society (Deadpool is insanely driven by this motivation). The film is also one of my new all-time favorite superhero flicks; and I hope they make a lot more R-rated comic book movies, like it, due to it's success!
at 6:03 PM
Labels: 20th Century Fox, Deadpool, Marvel Studios, Reviews, Ryan Reynolds