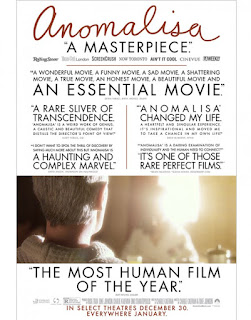 'ANOMALISA': Four and a Half Stars (Out of Five)


The first R-rated animated movie, to ever be nominated for Best Animated Feature (at the Academy Awards, and the Golden Globes), is this stop-motion drama flick. It was directed by Charlie Kaufman, in his third directorial effort (and it's his first time helming an animated feature), and Duke Johnson (who's had plenty of experience, directing animation on TV). The film was written by Kaufman, and it's based on his 2005 play (of the same name). The movie tells the story of a socially awkward 'self-help' author, who finally meets a young woman who inspires him; while on a business trip, away from his family. It stars the voice talents of David Thewlis, Jennifer Jason Leigh and Tom Noonan. I enjoyed it, about as much as I've enjoyed all of Charlie Kaufman's films (except for 'ETERNAL SUNSHINE OF THE SPOTLESS MIND', that's my favorite).

Michael Stone (Thewlis) is a popular writer, who specializes in 'self-help' books; that travels to Cincinnati, to promote his newest novel. He has severe problems relating to other people, even his own wife and son; who he always hears speaking with the same male voice (Noonan). Then he meets a young woman, named Lisa (Leigh), and he thinks he's finally met someone he can connect with. The voices, in his head, keep trying to stop him though.

The film is about everything you've probably come to expect, from Charlie Kaufman; except it's animated, using stop-motion puppets. The movie is really bizarre, but it's also a great examination; of what makes certain people unique, and unable to relate to others. Some people (including multiple friends of mine) think you can diagnose every person like this, with aspergers. Life is much more complicated than that though, obviously. The film is creepy, sad and strange; but it's also moving, and inspiring, in many ways. It's really interesting to watch, too, and just a really unique experience!
at 2:11 PM
Labels: Anomalisa, Charlie Kaufman, Jennifer Jason Leigh, Paramount Pictures, Reviews