"The Revenant" Review by TIm Hellman 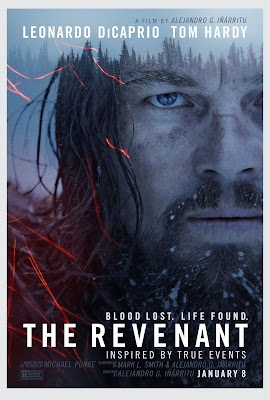 'THE REVENANT': Four and a Half Stars (Out of Five)

This year's Oscar hopeful, from last year's Academy Award winning director, Alejandro G. Iñárritu; is this action/western epic (inspired by the life of American frontiersman Hugh Glass). It's set in the 1820's, and tells the tale of Glass's obsession for revenge; against the man who killed his son. The movie was directed by Iñárritu, and co-written by Iñárritu and Mark L. Smith; based loosely on the 2002 novel, of the same name, by Michael Punke. It stars Leonardo DiCaprio and Tom Hardy; and it costars Domhnall Gleeson, Will Poulter and Forrest Goodluck. The film was originally budgeted at $60 million; but costs ballooned to $135 million, by the end of filming (due to excessive filming hardships). It's received mostly rave reviews from critics, and it's also expected to be nominated for several major Academy Awards; with DiCaprio a favorite to (finally) win Best Actor. Despite the painfully slow pacing (at times), I really enjoyed it.

The story is set in 1823, and it follows a hunting party; searching for pelts, in the Louisiana Purchase wilderness. The most experienced hunter, Hugh Glass (DiCaprio), is mauled by a mother grizzly bear; protecting her cubs. Glass's party tries to keep him alive, and take him with them; but he becomes too much of a burden, to their survival. Captain Andrew Henry (Gleeson) offers three men extra pay; to stay behind with Glass, until he passes (to give him a proper burial). Glass's son Hawk, a half-blooded Native American, volunteers; as do John Fitzgerald (Hardy) and Jim Bridger (Poulter). The opportunistic Fitzgerald attempts to kill Glass, by smothering him, and instead kills Hawk, to silence him; when the boy tries to rescue his father (unbeknownst to Bridger). Glass, who's then left for dead by the two others, miraculously survives his deadly wounds. He then makes it his mission, to get revenge on Fitzgerald; for the death of his son.

The movie looks breathtaking, and the story always seems very epic. The action scenes are spectacular, and also very realistic looking. DiCaprio is amazing in the film; and he definitely deserves an Oscar (like he has for years now). Tom Hardy (my favorite actor) is also very good, in his despicable antagonistic role. Iñárritu is a very gifted director; but (like any really talented artist) when he's given complete reign of a project (like this), he lets his ego get a little too inflated. He's said to be a very hard filmmaker to work with, but he definitely gets results (this film does seem self indulgent though). The pacing is way too slow; with 15 to 30 minutes more cut out of it, it could have been a true masterpiece. It's still a great film though, and it's definitely worth seeing; for it's stunning visuals, entertaining action sequences, and amazing performances.
at 2:30 PM
Labels: 20th Century Fox, Alejandro G. Iñárritu, Domhnall Gleeson, Leonardo DiCaprio, Reviews, The Revenant, Tom Hardy