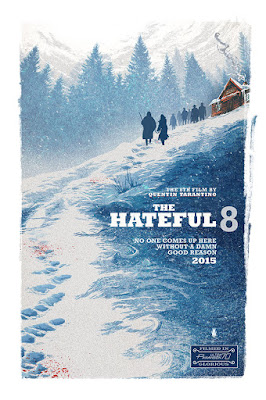 'THE HATEFUL EIGHT': Five Stars (Out of Five)

Writer/director Quentin Tarantino's gruesome western epic; about nine vile strangers, that hold up together in a stagecoach stopover, during a deadly blizzard (in Wyoming), sometime after the American Civil War. The movie stars Samuel L. Jackson, Kurt Russell, Jennifer Jason Leigh, Walton Goggins, Demian Bichir, Tim Roth, Bruce Dern, Michael Madsen, James Parks and Channing Tatum. The film was released in two versions; a standard 167 minute theatrical cut, and a special 70mm Roadshow version (that's 20 minutes longer). I saw the Roadshow presentation, and it was well worth it. The film is a classic; Tarantino at his best!

The story takes place in the Wyoming winter, sometime after the Civil War. It revolves around a bounty hunter, named John Ruth (Russell), and his prisoner, Daisy Domergue (Leigh). They're headed to the town of Red Rock; where Daisy will hang, for her notorious crimes. Along the way they meet up with another bounty hunter, named Major Marquis Warren (Jackson), and a man who claims to be the new sheriff of Red Rock, named Chris Mannix (Goggins). When the group becomes stuck, in the middle of a horrendous blizzard, they head to a well known haberdashery; to wait it out in. Once there, they meet four more strangers; and none of them appears to be very trustworthy.

The film is classic Tarantino; if you like his stuff, you should love it. It's filled with grotesque violence, foul language and other disgusting debauchery; but it's also a fascinating character study, with a strong message about race relations. The movie plays out in two distinct acts; the first being filled with lots of character development, excessive dialogue, and plot buildup. The second act is almost all violent, bloody, payoff (it's like two different movies almost). I love the way it was structured, and I was intrigued by nearly all of the film's despicable characters. I also really enjoyed seeing the movie in it's glorious 70mm presentation (it's well worth the extra ticket price, in my opinion). The pacing, in the first act, will test some viewer's patience (as all Tarantino films do); and so will the violence, and offensive imagery. I think it's all worth it, in my opinion, though. The film is a masterpiece; and seeing the Roadshow presentation of it, was one of the greatest filmgoing experiences I've ever had!
at 2:25 PM
Labels: Channing Tatum, Kurt Russell, Quentin Tarantino, Reviews, Samuel L Jackson, The Hateful Eight, The Weinstein Company