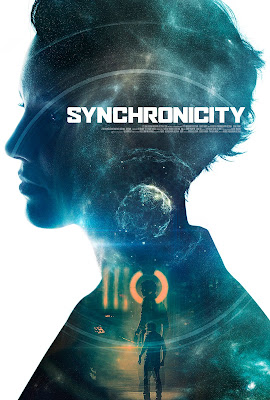 The film is about scientist Jim Beale (Chad Mcknight) who invents a machine that can travel to the past. He soon discovers that his machine comes with a price as he finds out that a ruthless businessman (Michael Ironside) is out to steal his invention with the help of a mysterious woman (Brianne Davis). Finding out that fact, Jim decides to go through the wormhole and try to stop what is going to happen in the future to his invention.

Going into this film I was curious about it because the film is directed by Jacob Gentry, who was one third of the directing team behind the brilliant horror film “The Signal” that was released in 2008. What I got out of this film was nothing short of brilliants, as this is an early contender for my best of 2016 list.

Gentry does a very good job making sure the flow of the film moves at very good pace. It’s hard to do considering the time travel aspects and keeping track of everything that goes on, but he makes sure the scenes have a level of content whether its visually or the way that he shoots this film. It help makes the film move while exploring the main character and the whole time travel mystery that goes on. Gentry also very good job making sure the performances keep the action. Whether it’s the way he has his small cast approach their roles to how the chemistry between the cast is very good, it helps make an interesting film like this one more entertaining.

Speaking of the performance, it was the best thing about this film. Both Chad McKnight and Brianne Davis were great in this film. I liked, the way that each of them approaches their characters as it made some of the film’s pivotal scenes along with their screen time together work so well and keep things interesting. The film also has very good supporting performances from Scott Poythress (The Signal) A.J. Bowen (You’re Next, The Sacrament) as the two scientists working alongside McKnight and Michael Ironside (Starship Troopers, Turbo Kid) as greedy tycoon.

Before I go into the film’s screenplay, I can’t help but praise the score of this film from Ben Lovett. This was a brilliant score as it adds to the film. It captures the tone of the film that is needed to be in rhythm with the scenes while also having this retro feel to it that works so well. Would love to see this on MP3 or CD in the future.

The screenplay written by Gentry with story co created by Alex Orr was good and less confusing than I expected. That was one of the things that I liked about it as sometimes during time travel and alternate universes films everything feel confusing especially when the main character keep running back to time period where the film starts. It didn’t feel that way, because the pieces fit together easily that it made sense with the beginning. The other thing that this screenplay does very well was to make the action feel like it could work as a film noir. Whether it’s visualized in the screenplay or the way the story is conceived, everything that goes on here feels original and something that isn’t seen in many science fiction films. It’s what was able to pull me in from the first fifteen minutes to the very end.

“Synchronicity” is the first great film of 2016, as this is one of those films that you should go out of your way to check out if you're into films that deal with the seriousness of time travel and alternate selves. With its stellar directing and entertaining screenplay, “Synchronicity” is a time traveling noir that deserves to be checked out.

“Synchronicity” is currently playing in limited release and VOD.