"Scouts Guide to the Zombie Apocalypse" Review by Tim Hellman 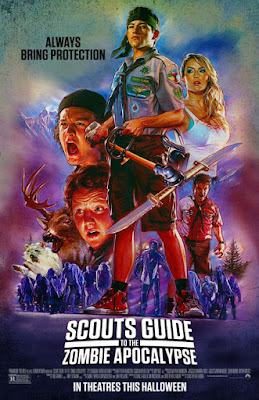 'SCOUTS GUIDE TO THE ZOMBIE APOCALYPSE': Four Stars (Out of Five)

A teen/horror-comedy 'zombie flick'; dealing with three scouts, taking on a zombie apocalypse, in their hometown. The film was directed by Christopher Landon (who also helmed 'PARANORMAL ACTIVITY: THE MARKED ONES'); and it was written by Landon, Carrie Evans, Emi Mochizuki and Lona Williams. It stars Tye Sheridan (of 'THE TREE OF LIFE' and 'MUD' fame), Logan Miller, Joey Morgan, Sarah Dumont, Halston Sage, Patrick Schwarzenegger, Cloris Leachman and David Koechner. The film is pretty much everything you'd expect, from it's title; and it does it's job perfectly.

The story revolves around three high school sophomores, that are also the only scouts in their small town. Ben (Sheridan) and Carter (Miller) feel like they're getting too old, to still be scouts; while their other best friend, Augie (Morgan), is still proud to wear the uniform. On the night of their last camp-out together, Ben and Carter decide to ditch Augie; to go to a secret senior party. Then the boys all realize, that their town has been taken over by zombies; and their scout training actually comes in handy. So does the help of a beautiful stripper, named Denise (Dumont), who bought the boys alcohol; earlier that day.

The movie is filled with sex, violence, nudity, crude jokes, and lots of foul language; everything teen boys, the age of scouts, like (too bad they can't get into theaters, to see it though). Thankfully the movie went straight to VOD, just 17 days after it left mainstream cinema (as part of a studio experiment). The film is great 'juvenile male-bonding fun'; everything I liked as a kid, growing up. The movie even has a positive message about friendship (over popularity, and coolness) hidden in there, somewhere. It's a lot of fun!
at 10:30 AM
Labels: Paramount Pictures, Reviews, Scouts Guide to the Zombie Apocalypse