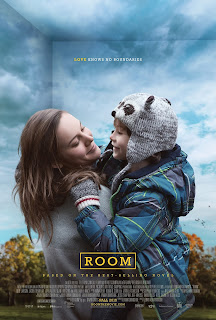 The critically acclaimed dramatic thriller flick; directed by Lenny Abrahamson and written by Emma Donoghue (based on her 2010 novel, of the same name). The film is about a young mother, being held captive in a locked single-room, with her 5-year-old son. The boy has never known life, outside of the room; so his mother creates a complete alternate reality, inside the room for him. It stars Brie Larson and newcomer Jacob Tremblay, as the kidnapped mother and son. It also costars Sean Bridgers, Joan Allen and William H. Macy. The film is predicted to be a likely Oscar contender, come awards time, and it's received almost unanimously positive reviews, from critics. I liked it.

Jack (Tremblay) is five-years-old, and he's been locked in a single-room, with his mother Joy (Larson), all of his life. He's never seen the world, outside of the room, and his mother has taught him 'room' is all there is. We later learn that Joy was kidnapped when she was 17, and her captor impregnated her, with Jack, five-years earlier. As Joy becomes even more desperate, to escape, she finally enlists Jack's help, in a dangerous plan.

The film is really dark and depressing, but there's also a slight bit of hope (in the darkness). Larson is fantastic in the lead, and Tremblay is also amazing (especially for an actor so young). The movie is very moving, intense and heartbreaking; it's beautifully directed by Abrahamson, and brilliantly written by Donoghue. The film is basically everything you'd expect from a critical darling 'Oscar hopeful'. It's pretty hard to watch though, at times, but it's worth it.
at 10:23 AM
Labels: A24, Brie Larson, Reviews, Room