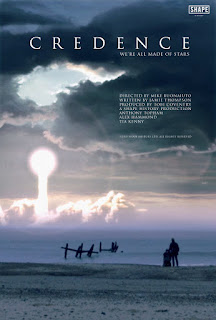 "Creedence" is available for purchase through Viemo on Demand for $5.99. To purchase this film, you can go to: https://vimeo.com/ondemand/credence/142371310

For more information on this film, you can visit the film's Facebook page at: https://www.facebook.com/CredenceFilm

Shape History, a creative agency advocating for social change, has released their latest short film on Vimeo on Demand. LGBT people have long been passionate fans of science fiction, but rarely are they represented in the genre. Director Mike Buonaiuto, Founder and Creative Director of Shape History, is excited to highlight a same-sex family in a story well-known to all sci-fi lovers. John and Scott, faced with the extinction of the human race, move heaven and earth to save their daughter Ellie. The film raised £23,000 and had a world premiere at Leicester Square.

Credence follows two fathers' decision to make the ultimate sacrifice to ensure the survival of their daughter. Set in the not too distant future, where an asteroid has struck the moon - causing severe and fatal weather patterns that threaten the extinction of the human race. Hope has been found in escape rockets for the children of the world - but only the rich and powerful have been able to get tickets. Plagued by the dilemma many families have faced throughout history of being parted with their child to ensure their safety, this pre-apocalyptic tale of evacuation focuses on the human story and love between parent and child.