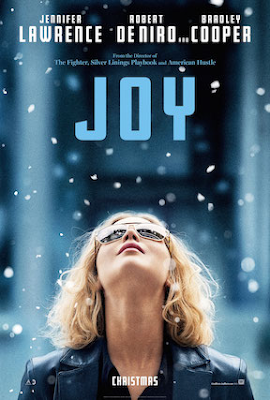 The new comedy-drama flick from writer/director David O. Russell, starring Jennifer Lawrence (it's their third time working together). The film also reunites Lawrence, and O. Russell, with actors Robert De Niro (for the third time) and Bradley Cooper (marking Lawrence and Cooper's forth pairing together, in a film, and O. Russell's third time working with Cooper). The movie tells the true story of Joy Mangano; a self-made millionaire, who started a business empire, selling her invention 'the Miracle Mop'. O. Russell directed and co-wrote the film, with Annie Mumolo; it also costars Edgar Ramirez, Diane Ladd, Virginia Madsen and Isabella Rossellini. I absolutely loved the movie; and found it to be yet another masterpiece, from David O. Russell (one of my favorite filmmakers).

The story begins in 1992; when Joy Mangano (Lawrence) was already divorced, with two kids, and working for United Airlines. Her mother (Madsen), grandmother (Ladd) and ex-husband (Ramirez) were all living with her, and her kids, in Quogue, New York. Her father, Rudy (De Niro), moves back in with Joy; after breaking up with his second wife. Rudy then begins dating a rich Italian widower, named Trudy (Rossellini). While spending the day with Rudy and Trudy, on Trudy's boat, Joy breaks a wine glass. When she cleans up the broken glass, she comes up with the brilliant idea of a 'Miracle Mop'. Joy then becomes obsessed with following her dream; of becoming a successful businesswoman, by selling her new idea.

The movie is classic David O. Russell; it's filled with crazy oddball characters, and extremely bizarre comedic situations (involving them). The film also has powerful, and very inspiring, dramatic moments. All of the performances in the film are impressive, but it's Lawrence who really powers the story (once again). The film is a classic female empowerment tale; Lawrence's 'Joy' character makes her dreams come true, almost entirely on her own, despite interference from multiple loved ones (and other complications) around her. It's another inspiring classic from David O. Russell, and Lawrence is a the top of her form!
at 11:53 AM
Labels: 20th Century Fox, Bradley Cooper, David O' Russell, Jennifer Lawrence, Joy, Reviews, Robert De Niro