"Confessions of a Superhero" Looks for Your Help on Kickstarter 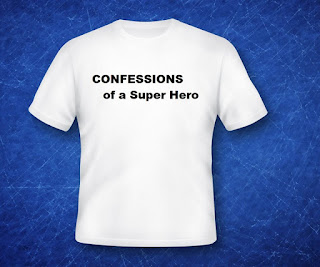 Drunk Justice Productions recently send us information for their Kickstarter campaign for their web series "Confessions of a Superhero". The filmmakers are looking to raise $10,000 before February 3rd. The project will be funded, if they raise $10,000 by the end of its campaign.

To contribute to this Kickstarter campaign or for more information, you can goto:   https://www.kickstarter.com/projects/539774280/confessions-of-a-superhero

“Confessions of a Superhero” is a comedic script written by Scott Sawitz and Mike Noyes, set to begin shooting in May of 2016. This is a passion piece for the two of us, something we’ve been working on in various forms since 2009. It’s been a project we originally envisioned as a web series, then as a movie, then as a TV show, and now have gone back to web series.

We want to provide a new, unique and refreshing look into the ever expanding world of comic books, superheroes and villains. Marvel and DC give us a certain, sanitized look on the big and small screen about superheroes. We’re aiming to bring a diverse cast of characters together for a more mature take on the genre.

What happens when superheroes stop being polite … and start being real? You’ll find out during “Confessions of a Superhero.”

John Boehner is Captain Liberty, protector of San Francisco and hero to children. Blake Larson is Professor Payne, his nemesis and super villain. They don’t know one another’s secret identity … which would make their lifelong friendship and current living arrangements as roommates rather difficult.
It’s poker night as John’s super powered hero friends are coming over to welcome the newest recruit into their super powered club.  Hyperactive Ben's from Boston and John's partner in crime.  Matt and Jim are the two elder statesmen of the team ... and the old married couple of the gang.  For Kurt it's his first night as a member of the Legion of Valor.

Meanwhile Blake is out on the town, as he’s looking for love on the internet.  Also he has a death ray to finish.  San Francisco isn't going to hold itself hostage, you know.

It’s a look into the everyday lives of the super powered.

We intend to go into production in May for 10 days, with an August launch date on YouTube. We’re going to deliver an episode a week, with a mid-week piece about the show itself as well as a Friday preview piece as well.

Why Kickstarter?
We want this to be as independent as possible, so that we don’t have to compromise our vision. Thus we’ve gone to the crowd funding route, to help us get word out about the series. We also wanted to incentivize the filmmaking experience to our contributors. We’re in this together and the series will be free to all on YouTube once we’re done with production.

What's the funding for?
We need this to fund the production of the series. The first round of capital helps us to kick start our production so that we can feed the cast and crew, rent our primary locations and make this dream of ours into a reality. A $100 donation will help us feed the cast and crew for a day. $500 will buy half of our props for the entire shoot.

Even the smallest donation can help. We're not asking you to donate every penny you have for our cause; we humbly ask for your support at even the smallest level. Every donation helps. If we exceed our goal then every dollar beyond that is going to go right back to the production. We’ll pay the cast better, for starters, with every day that goes above and beyond the amount we’re looking for as well give a better quality project in the end.

Where's "Confessions of a Superhero" going to be broadcast?
We want this show to be out there for all to see so that we have the widest visibility for all involved. Shows like “The Guild” have started this way and we feel it’s the best way forward.
On top of making it available on the internet we also plan on pressing it to DVD. The initial plan is to get it out on the various social media channels and drive viewers.

Stretch Goals
Our stretch goal at $12,000 will be that both Lego scenes that are located in our rewards section will be guaranteed to be made even if they aren't funded.

Our stretch goal at $15,000 will be three separate HenchBuilder.com sketches.

Our stretch goal at $20,000 will be a two disc special edition of the DVD instead of the single DVD release we're planning on.

This unique web-series can only happen with your help. The team at Drunk Justice Productions has completed other projects in the past on limited budgets and we're looking to get another great one under our belts.

Superheroes and humor have been put together in the past and with great success. This won't happen without your generous help and support.
at 2:47 PM
Labels: Confessions of a Superhero, Drunk Justice Productions, Indie News, Web Series