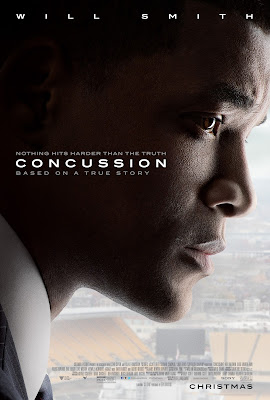 'CONCUSSION': Four Stars (Out of Five)

A medical/sports-drama biopic, based on the true story of the Nigerian forensic pathologist, named Dr. Bennet Omalu, who took on the NFL; in trying to expose the dangers of brain damage (in the extremely violent sport). The movie stars Will Smith, as Omalu, and it costars Albert Brooks, Alec Baldwin, Gugu Mbatha-Raw and David Morse. It was written and directed by Peter Landesman; and based on the GQ article 'Game Brain', by Jeanne Marie Laskas. The film is well acted, written and directed; it's definitely pretty powerful stuff (but maybe a little too systematically constructed, in the tradition of big budget Hollywood).

The film begins in 2002, when Mike Webster (Morris), a former Pittsburgh Steelers center, suffered from severe brain damage, and died; homeless in his pickup truck. A gifted forensic pathologist (from Nigeria), named Dr. Bennet Omalu (Smith), was assigned to perform his autopsy. Omalu discovered that Webster's death was caused by brain trauma, he later named CTE, and he linked the 'cause of death' to multiple other professional football players. The National Football League, of course, used all their money, and power, to cover-up his findings.

The movie is informative, and very involving; for the majority of the film. Smith is fantastic in the lead, and the supporting cast all does adequate jobs. This is a movie that tackles the 'very inspiring subject', of the little guy, taking on a big powerful corporation. Landesman dealt with the same subject matter, in the last film he wrote: 'KILL THE MESSENGER' (except in that movie, the US government was the 'big powerful corporation'). This film reminded me a lot of 'KILL THE MESSENGER', and that was before I even knew it was the same screenwriter. I hope Landesman continues to do movies like this; and maybe next time, without such a big powerful corporation (backing the film). His next movie is (very fittingly) about the Watergate scandal; I just learned!
at 3:12 PM
Labels: Concussion, Reviews, Warner Brothers, Will Smith