Complete List of Theaters for the Upcoming Release of "Lazer Team" 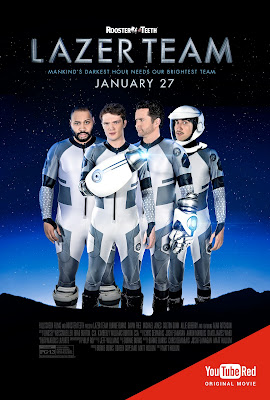 The film will be hitting theaters in limited release and YouTube Red on January 27th.

For more information on this film, you can visit the film's official website at: www.lazerteamthemovie.com
Press Release:
With 20 million subscribers to its YouTube Network and 3 million unique monthly visitors to its website, Internet sensation Rooster Teeth is excited to share their first feature film, the sci-fi comedy LAZER TEAM, with fans and audiences around the world!


LAZER TEAM will open Friday, January 29 in the following markets/theaters, with filmmakers and cast making special appearances at select screenings on opening night.