Action Thriller "Badge of Honor" Blasts Its Way to DVD 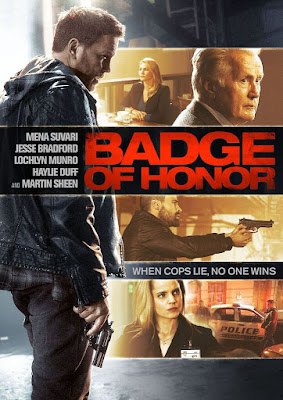 On her first day of the job, brand new Internal Affairs detective, Jessica Dawson (Mena Suvari), gets caught up in the aftermath of a violent drug bust that includes an officer shooting of an innocent young teenager. The facts, as reported by the two narcotic detectives, just don’t seem to add up. As she struggles to find the truth, the ramifications of a single lie reverberate throughout the whole precinct. Soon she finds she can’t trust anyone, including the precinct captain (Martin Sheen). In this gritty crime thriller that could be ripped from today’s headlines, it’s cop vs. cop in a deadly fight for honor.
at 10:29 AM
Labels: Alchemy, Badge of Honor, DVD News