"13 Hours: The Secret Soldiers of Benghazi" Review by Tim Hellman 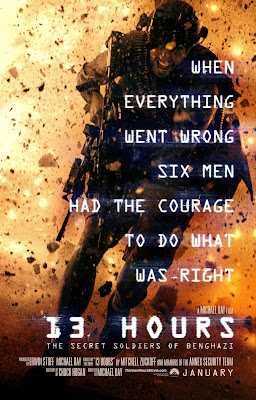 '13 HOURS: THE SECRET SOLDIERS OF BENGHAZI': Four Stars (Out of Five)

A war film, depicting true events (at least somewhat); of the 2012 terrorist attacks, on the American diplomatic compound in Benghazi. The story focuses on the six (brave) American security contractors, who defended the compound; and then came under attack, themselves. The movie was directed by Michael Bay, and written by Chuck Hogan; it was based on the 2014 book, '13 Hours', by Mitchell Zuckoff. It's a bit too long, slow-paced at times, and not very dramatically involving (compared to what it should be); but it's still a decently entertaining action flick (as all Michael Bay films are).

When an American ambassador (Matt Letscher), was visiting a U.S. compound, in 2012 Libya, an army of Islamic militants attacked him. A six-man security team, stationed in the area (made up of military veterans), tried to come to his defense; and then they were attacked themselves. The film stars James Badge Dale, John Krasinski, David Denman, Max Martini, Dominic Fumusa and Pablo Schreiber; as the team. It also costars David Costabile; as their arrogant commander Bob (also called 'The Chief'). Chaos, and very violent bloodshed, ensued.

I don't have any idea how accurate, or true (to actual events) this movie is; or if it has a political agenda (or not). I can review it (simply) on it's own merits, as a movie though. I think it's a pretty entertaining action flick; but at 2 hours and 24 minutes, it's a bit too long. It's also really slow-paced, at times (despite all of it's bloody action), and sometimes it's pretty hard to follow. That might have been Bay's intent though, to better relay what the soldiers were going through (complete chaos). In some ways, Bay is perfect for this type of movie; and in other ways, he's not. He's definitely good at the action scenes, even though they're so chaotic. The film kind of reminds me of a 'TRANSFORMERS' flick (at times); in how hard it is to tell what's going on. Bay is also not that good at emotional depth, or character development; but he does deliver some good drama (especially at the end). Krasinski and Dale are both great action hero leads. It is odd to see Krasinski teamed with Denman, again though (in a serious action movie). Both actors were on 'THE OFFICE' (as Jim and Roy); I kind of wanted to watch them fight again, over Pam. The film is also not nearly as good as 'AMERICAN SNIPER' or 'LONE SURVIVOR'. Both of those movies were also released on the 'Martin Luther Day' holiday weekend (in 2014 and 2013). Hollywood definitely knows how to follow a successful business pattern!
at 8:22 PM
Labels: 13 Hours: The Secret Soldiers of Benghazi, Michael Bay, Paramount Pictures, Reviews