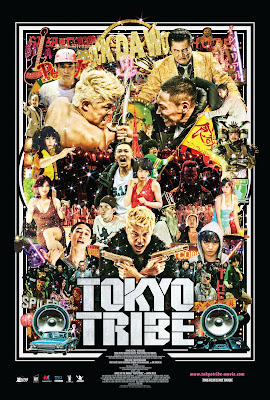 'TOKYO TRIBE': Four and a Half Stars (Out of Five)

A martial arts/action/comedy/musical flick, spoken almost entirely in rap verse! The film has been described (by it's marketing campaign) as "The world's first battle rap musical", and it's based on the popular Manga series, 'Tokyo Tribe2', by Santa Inoue. It was written and directed by Sion Sono (who's probably most well known for helming 2013's 'WHY DON'T YOU PLAY IN HELL?') and it stars Ryohei Suzuki, Young Dais, Riki Takeuchi, Shota Sometani, Ryuta Sato and Akihiro Kitamura. The movie tells the story of a futuristic Japan, divided into territorial gangs; until one gang leader breaks the truce. It's one of the craziest, and most bizarrely original films, I've seen all year!

Sometime, in the not too distant future, Japan is divided into separate street gangs; each representing a different faction, collectively known as the 'Tokyo Tribes'. The leader of one tribe, Mera (Suzuki), decides to break the peace, and join forces with another ruthless gang leader, Buppa (Takeuchi). Together they wage war on another tribe, and cause an 'all out war'. Blood fills the streets; as everyone turns to brutal violence, and continuous rapping.

The movie is really weird, and definitely not for everyone, but I like 'weird'; and I found myself really enjoying it. The film took a little while for me to get into, at first it's pretty jarring; but once I was 'hooked', I was completely involved and thoroughly entertained! The action is brutally violent, and many scenes are pretty twisted and sadistic; but it's also filled with catchy hip- hop music, and beautifully choreographed fight scenes. The performances are great, and the visuals are always interesting to look at. The film is sure to become a beloved cult classic, by many genre fans, while many others will hate it. You know you're witnessing 'great art', when people are completely divided!
at 5:27 PM
Labels: Reviews, Sion Sono, Tokyo Tribe, XLrator Media