"Mosquito-Man" Serves Up Revenge on DVD 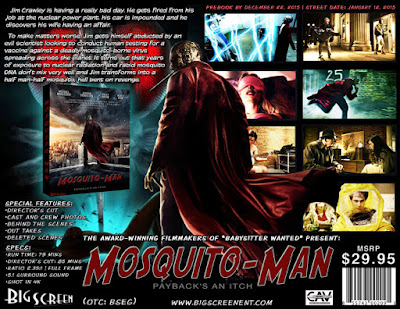 Special features on the DVD includes Behind The Scenes, Directors Cut Included, Out-takes, Cast and Crew Photos and Trailer.

Jim Crawley (Michael Manasseri) is having a really bad day. He gets fired from his job, his car is towed and impounded and he discovers his wife is having an affair with his arch enemy. To make matters worse, Jim gets abducted by an evil scientist (Ricky Wayne) who is conducting illegal human testing on a vaccine against a deadly mosquito borne virus that's speeding across the planet. It turns out that years of exposure to nuclear radiation and mosquito DNA don't mix well... Jim transforms into a half man/half mosquito hell bent on revenge... Mosquito Man - Payback's an Itch
at 9:52 AM
Labels: Big Screen Entertainment Group, DVD News, Mosquito-Man