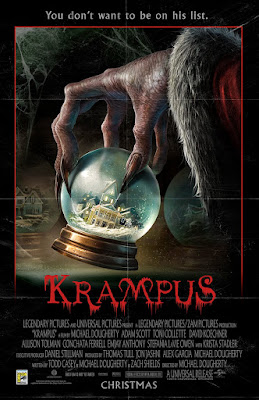 It’s been a while since I had the chance to review a theatrical release on this site. Most of it was money reasons and most of it was just the handle of running two blog sites. When I heard “Krampus” was coming out, I knew that I had to reviews this because of how much I loved Michael Dougherty’s last film “Trick r Treat”.

The film is about a family that is completely dysfunction as they get ready to spend Christmas together. A young kid named Max (Emjay Anthony) becomes disenchanted by the idea that Christmas is a great time and doesn’t believe Santa is real. This unleashes a demonic entity on him and his family known as the Krampus. As everything starts hitting the fan he and his family are forced to fight together if they intend on making it to Christmas Day. The film also stars Adam Scott (Black Mass, Park and Recreation), Toni Collette (The Sixth Sense, Little Miss Sunshine), David Koechner (Anchorman) and Allison Tolman (Fargo, The Gift).

If you’re going in to this thinking that “Krampus” is going to be “Trick R’ Treat” all over again, you’re going to be disappointed. If you’re looking for a good Christmas theme horror film, you’re in luck as I had a good time with this film.

One of thing that make this film very good was the directing. Michael Dougherty does a very good job making sure the film has a creepy and sometimes dark feel to it. Whether it was the way the scenes looked to how he handles the material, everything felt dark enough to make the scares works well as there were a couple that made me jump out. It helped make up for the minor gore that this film has. The other thing that Dougherty does very well is the way he directs his cast. He does a good job making sure the performances hit the right note which was tricky as it had humor to go along with the terror. This is what makes the characters interesting even though there were annoying which this script was trying to go for.

The screenplay written by Dougherty & Zach Shields & Todd Casey does a good balancing the horror and comedic aspects. One of the things that makes this screenplay good was the fact the horror scenes were creative considering its rating. I know that this is a PG-13 (which I’m surprised given the language this film has) film but I liked the fact that this film had little gore. I liked how they just take away the characters or not get too graphic about it. It gives you the thinking of what happened to them in your mind and it also works with the payoff of the film’s ending. It’s different and something I wasn’t expecting but it went in a direction that works in the end. The other thing that I liked about it was the way they used the black comedy aspect. The writers do a good job making sure that its witty and timed right. It’s done in a way that it doesn’t drown out all the creepy and dark aspects of the plot and tone.