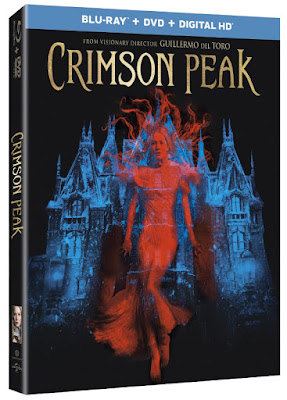 A sheltered young woman abandons the safe certainty of her upbringing for life with an alluring aristocrat on a remote English estate in Crimson Peak, a visually stunning and intensely disturbing thriller from writer and director Guillermo del Toro (Pan's Labyrinth, Hellboy), coming to Digital HD on January 26, 2016, and Blu-ray™ Combo Pack, DVD and On Demand on February 9, 2016, from Universal Pictures Home Entertainment and Legendary Pictures. Brilliantly unforgettable visuals and an atmosphere steeped in dread make Crimson Peak an elegant, gorgeously realized and completely original horror mystery that has been declared "a masterpiece" by Fox-TV. The Blu-ray™ Combo Pack comes with more than an hour of bonus features that reveal some of the terrifying secrets hidden behind the doors of sinister Allerdale Hall.