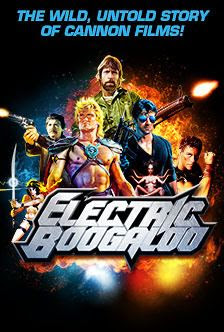 ELECTRIC BOOGALOO: THE WILD, UNTOLD STORY OF CANNON FILMS': Four and a Half Stars (Out of Five)

The film explores how two movie obsessed Israeli cousins (Golan and Globus) followed their dreams; and moved to America, to make movies. They started Cannon Films; which was notorious (in the 80s) for making really low-budget B-movie exploitation flicks. Most of them contained lots of explicit sex, nudity and violence. Most of them were also really bad movies, and Box Office failures. They did have a few hits, on occasion though, and some (a few) were pretty good movies too. The cousins were also infamous for being really cheap, somewhat abusive and extremely prolific.

I grew up on so many Golan and Globus produced movies; seeing their logo now, is extremely nostalgic for me. They discovered action stars like Jean Claude Van-Damme (one of my favorite actors as a kid) and Michael Dudikoff; they also made several action vehicles, for the likes of Chuck Norris and Charles Bronson. I watched most of them, and I loved them as a kid. So I really enjoyed this movie. I especially liked learning how they were made; and hearing several comical stories, about the process, from many actors (and other filmmakers) involved. Being a movie lover myself, I can definitely relate to Golan and Globus's passion, and obsession for filmmaking. It's a really fun movie to watch!
at 9:38 AM
Labels: Cannon Films, Documentary, Electric Boogaloo: The Wild, Reviews, Untold Story of Cannon Films, Warner Brothers