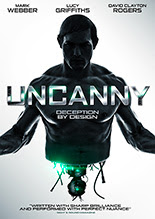 UNCANNY': Three and a Half Stars (Out of Five)

Indie sci-fi flick, about a reporter doing a story on the most advanced artificial intelligence unit the world has ever seen; and the scientist who created it. A bizarre relationship develops between all three. The film stars Mark Webber, Lucy Griffiths, David Clayton Rogers and Rainn Wilson. It was directed by Matthew Leutwyler (who also directed such indie sci-fi and horror flicks as 'DEAD & BREAKFAST' and 'UNEARTHED') and it was written by Shahin Chandrasoma. The movie is interesting, and well made, especially for such a (seemingly) low budget production.

David Kressen (Webber) was an MIT graduate, at the age of 19. He was hired by billionaire Simon Castle (Wilson), upon graduation, and never seen or heard from again. Joy Andrews (Griffiths) is a technology reporter, who was just given a week's worth of time to interview David, and his most advanced creation; an artificial intelligence named Adam (Rogers). Adam is so lifelike, that Joy mistakes him for a human-being, upon introduction. As the week goes by, Joy develops feelings for David; while Adam also appears to develop feelings for Joy. The A.I. becomes very unpredictable, and frightening, because of it.

When I first started watching this movie, I had severe doubts that I would like it; because it seems extremely low-budget, and amateurishly made (at first glance). I was happy to find out I was wrong (by the end of the film). There's not a lot of action, or flashy visuals, but it is a well written and decently acted movie. I was intrigued, and involved in what was going on, all the way to the very end. It kind of reminds me (a little) of 'EX MACHINA', from earlier this year; just on a much smaller (and lower budget) scale.
at 4:52 PM
Labels: Rainn Wilson, Reviews, RLJ Entertainment, Uncanny