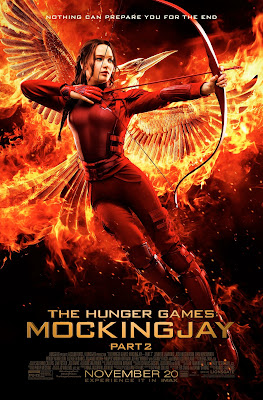 'THE HUNGER GAMES: MOCKINGJAY - PART 2': Five Stars (Out of Five)

The epic conclusion to the immensely popular sci-fi saga; based on the bestselling YA book series, of the same name, by Suzanne Collins. This forth installment, is the second movie based on the third (and final) book: 'Mockingjay'. In this chapter Katniss Everdeen plots to assassinate President Snow, while the rebels also wage war on the Capitol. It once again stars the always impressive Jennifer Lawrence, and it costars Josh Hutcherson, Liam Hemsworth, Woody Harrelson, Donald Sutherland, Julianne Moore, Sam Claflin, Natalie Dormer, Jena Malone, Willow Shields, Elizabeth Banks and the late Philip Seymour Hoffman (all reprising roles from earlier films). Francis Lawrence returned to direct, for the third time, and Peter Craig and Danny Strong wrote the screenplay (they also co- wrote the last chapter). I think it's a beautiful, and stunning, conclusion to an epic film series (one of my favorites in recent years).

The story picks up right where the last one left off, with Katniss (Lawrence) recovering from being attacked by a brainwashed Peeta (Hutcherson). The rebels attack District 2, and take over it's weapons supply. They then continue a bloody assault on the Capitol. Katniss volunteers to assassinate President Snow (Sutherland), but President Alma Coin (Moore) doesn't want to risk losing her as a symbol (for the revolution); if she were to be killed. Katniss, being Katniss, does what she wants to do anyway; and joins the rebel forces. She's teamed, in a rebel squad, with Gale (Hemsworth), Finnick (Claflin), Cressida (Dormer), Peeta and others; in shooting propaganda footage of the brutal war.

I'm a big fan of the entire series, and this installment definitely doesn't disappoint. It's unrelentingly dark, disturbing and violent (I definitely think it should have been rated R). It's also completely epic and very moving (I let more than a few tears go). The end is perfectly fitting; and the political commentary is brutal and brilliant. I love Jennifer Lawrence, and she once again gives one of the best performances of the year; but the rest of the cast is decent as well, and I've really come to love all of these characters (especially Woody as Haymitch). For me it was just as exciting, emotional and fun, as the conclusions to any epic sci-fi film series; most notably 'THE RETURN OF THE KING'. It's definitely a 'must-see', and one of the best films of the year!
at 7:23 PM
Labels: Jennifer Lawrence, Josh Hutcherson, Julianne Moore, Liam Hemsworth, Lionsgate, Philip Seymour Hoffman (1967 -2014), Reviews, The Hunger Games Mockingjay Part 2, Woody Harrelson