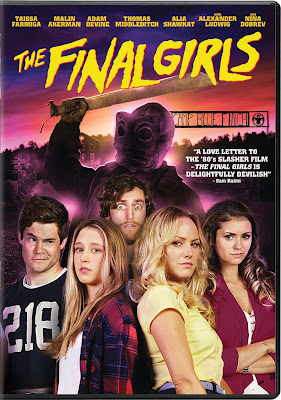 'THE FINAL GIRLS': Four Stars (Out of Five)

A horror spoof/homage, to classic 80s slasher flicks of yesteryear; most obviously the 'FRIDAY THE 13TH' series. It tells the story of a teen girl, and her friends, who are sucked into the world of a 1980s slasher movie, costarring the girl's deceased mother; a former popular scream queen. The movie was directed by Todd Strauss-Schulson (who also directed the 2011 stoner-comedy sequel 'A VERY HAROLD & KUMAR 3D CHRISTMAS') and it was written by M.A. Fortin and Joshua John Miller. It stars Taissa Farmiga, Malin Akerman, Adam DeVine, Thomas Middleditch, Alexander Ludwig, Nina Dobrev, Alia Shawkat, Angela Trimbur, Tory N. Thompson, Chloe Bridges and Dan B. Norris. With the exception of it being a censored vision (shamelessly rated PG-13), it's a lot of fun and a decent throwback.

Max Cartwright (Farmiga) recently lost her mother, Amanda (Akerman), in a car accident. Amanda was an aspiring actress, who was once a popular scream queen; known for the 80s cult classic slasher film 'CAMP BLOODBATH'. Three years after her mother's passing, Max reluctantly agrees to attend a special screening; of 'CAMP BLOODBATH', and it's first sequel 'CAMP BLOODBATH 2: CRUEL SUMMER', with her friends. During the movie, a couple drunk viewers accidentally cause a theater fire. Max slits a hole in the theater screen, for her and her friends to escape through, but they instead magically enter the world of the movie. Max gets to meet her mother's character, inside the film world, but she also meets Billy Murphy (Norris); the notorious masked killer, of the film series. The group must find a way to stay alive, and defeat Billy, in order to get back to the real world safely.

The film is funny, and a brilliant homage to 80s slasher flicks; having grown-up on horror movies, like 'FRIDAY THE 13TH', I absolutely loved it! The acting is all great (especially DeVine and Middleditch), the directing is perfectly fitting (and campy) and the screenplay is witty, meta and cool; it's so much fun. There's also a surprising amount of well-done drama, involving the mother/daughter relationship; one of the writer's fathers (actor Jason Miller) also died on screen, in the classic horror film 'THE EXORCIST'. So the movie pretty much has it all. My only major complaint, is that it's PG-13 (something I didn't realize, until I got about a third of the way into it); and therefore it has no nudity, sex, bad language (except very briefly) or gore (all major necessities in classic slasher flicks). This movie could have been a truly great cult classic (just like the movies it's trying to emulate), if the producers (and studio backing it) actually had some balls! It's still a fun movie though; especially if you love horror flicks. It's just kind of like watching one that's edited for TV!
at 10:13 AM
Labels: Columbia Pictures, Malin Akerman, Reviews, Taissa Farmiga, The Final Girls