"The Condemned 2" Blasts Its Way to DVD & Blu-Ray 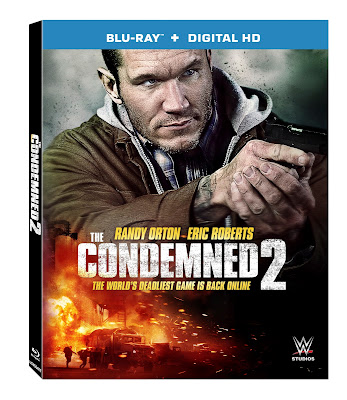 Special Features on the DVD & Blu-Ray includes "Drones" featurette and "Fight for Your Life featurette.

WWE Superstar Randy Orton and Academy Award® nominee Eric Roberts (Best Supporting Actor, Runaway Train, 1985) team up to battle the bad guys in the ultimate game of human survival, when The Condemned 2 arrives on Blu-ray (plus Digital HD), DVD (plus Digital) and Digital HD January 19 from Lionsgate Home Entertainment and WWE Studios. The edge-of-your-seat thriller is currently available On Demand. The follow-up to the hit theatrical release The Condemned, The Condemned 2 packs an explosive punch, as the hunters become the hunted in a lethal game of survival of the fittest. Featuring Wes Studi (Avatar) and Steven Michael Quezada (TV’s “Breaking Bad”) as the criminal game-makers, this mind-blowing combat thriller raises the stakes and takes audiences on the ride of their lives.

After a failed mission to capture the leader of a deadly gambling ring (Studi), bounty hunter Will Tanner (Orton) becomes the hunted - a human target in a game which forces contestants to kill or be killed. As high rollers bet on who will survive, Will, his father (Roberts), and their fellow teammates wage an all-out war against the deadly game’s wicked mastermind (Quezada).

The Condemned 2 comes loaded with heart-pounding special features providing a behind-the-scenes look at the making of the film. The Condemned 2 will be available on Blu-ray and DVD at the suggested retail price of $19.99 and $19.98, respectively.
at 2:20 PM
Labels: DVD/Blu-Ray News, Eric Roberts, Lionsgate, Randy Orton, The Condemned 2, WWE Studios