"Some Kind of Hate" Review - Written by Abraham Phillips 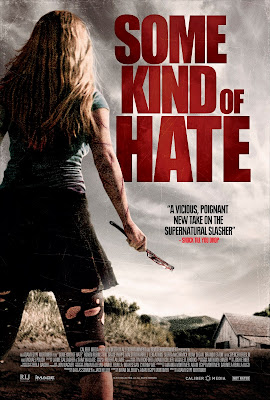 First off turn your brain logic off. This is a B-grade, possible C-grade horror film. There is substance to the plot at times but it’s very minimal. The plot is unoriginal, but still maintains an interesting entertaining horror reality, in somewhat thinking. I loved the killer, the supernatural reality, and the self-cutting to hurt. The main problem is the horrible dialogue and stupid un-logical reality to surroundings. A bullied kid named Lincoln, played by Ronen Rubinstein. Lincoln’s surroundings are a nightmare. He is picked on constantly. His father also a bully and a drunk. One day he decides to stand up for himself. He is punished even-though he didn’t start it, which is usually how life goes. He is sent to a new school for troubled kids, and the bulling continues to destroy Lincoln, but what is different this time is a girl named Moira, played by Sierra McCormick, who happens to be dead, because she committed suicide, due to bullying. Now Lincoln mistakenly calls Moira from her grave six feet under. There Moira uses all her undead mentality into a vengeful, revenge seeking justice. Sounds good right, well that’s when it stops.

This 82 minute horror thriller is a throwback Drive-In feature, but yet fails in so many ways. It has great blood, gore, death, and revenge, but sadly that can’t help it. This is co-written, and directed by a new comer into the movie making world, Adam Egypt Mortimer. This is his first feature length directorial debut. For this being a first time adventure, I feel it works with that mentality of a B-grade, stupid at times, over the top glory, with ludicrous concepts. Part revenge film, part slasher. Go into this turning your brain off, and you might enjoy. This is pure low budget, cheesy entertainment. Most of the plot is ludicrous, the wilderness school where people have sex, beat each other up all the while only having what I gather is 3 staff members. Look past the countless holes in the plot, and welcome a cheesy time; then you might be okay with it.

This is not for everyone. If you want star quality in plot, direction, and substance, then you will be majorly let down. Now if you’re a fan of B-movies, cheesy cinema, then this might work to a degree. I am a huge fan of B-movies, but I found myself rolling my eyes at the reality of the script. This so called school for troubled teens is outrageous. No legal system would ever send any kid to this place. The plot is stupid in that reality. Kids roaming around doing whatever they want. There are some key moments in the film that stick out. Some great gore, and death shots. From a neck slice, to brains being blown out. Some awesome weapons, and some cool deaths. I wanted to like this movie, but I could not get past the illogical reality of the situation, and the terrible written dialogue. The surroundings where not believable, and that is one of its major downfalls. I have to have some logic, and not just fancy, or very poor writing. There is a horrible gap in the logic in this film. I felt the movie lost me after 30 minutes. The movie was way too long, even with the 82 minute clock in. I found myself playing with my phone or looking at other things. On a good note, this is a solid product blu-ray wise.

Overall this was a pain to get through. So many plot holes, and ludicrous moments that took away from the cool concept of the villain, and even the good makeup and effects. When you’re making a movie, make sure the person doesn’t wear a tight shirt that showcases a microphone, and a microphone box. When you’re making a movie, when someone is burning up, after words make sure there clothes are burnt to, and not just the face. When making a movie give a logical surroundings to the characters, don’t throw them out in the desert wilderness, and expect us to think this is a school, when no one is paying attention or caring.

Like I say some will like, and some will not, I did not like, although I wanted to, and there are key moments to the film, but few in number to overlook the stupid surroundings, and actions of the behind the scenes. Poorly written.

Review Written by: Abraham Phillips
at 10:13 AM
Labels: Reviews, RLJ Entertainment, Some Kind of Hate