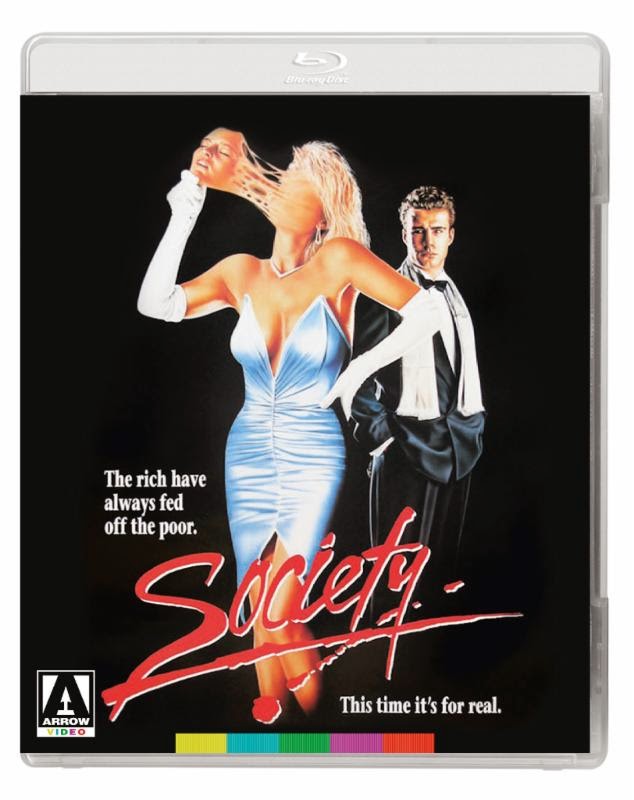 “Society” is one of those films that I’ve heard about but hadn’t been able to find a copy of the film at a reasonable price. That changed, when Arrow Video picked up the film for distribution and gave this a blu-ray release.

The film is about a teenager (Billy Warlock) who feels like the odd one out in his rich and wealthy family. His feelings take a dark turn when he hears a tape that implicated his family in some bizarre ritualistic gathering with friends. The people who might know what’s going on start disappearing mysteriously. He begins to wonder if this is his mind playing tricks on him or is there something sinister going with his parents.

Going into this film, I wanted to see Brian Yuzna’s directorial debut “Society” because of the fact that I liked Yuzna’s two “Re-Animator” sequels and “Return of the Living Dead 3” a lot. Thankfully, I decided to check our “Society”, as this was completely different in tone and originality from other horror films that I’ve seen. This along with “Return of the Living Dead 3” have been Brian Yuzna’s best films that he’s directed.

One of the reason that this film is very good was Yuzna’s direction. He does a very good job making sure everything looked creepy. From the way that he directs his cast to how the scenes are approached, everything gave me that weird vibe that you’re waiting for something to happen while being interested with the story. It keeps my interest during the course of the film as there isn’t much action until the last third of the film alone. Trust me, it’s worth the wait as Screaming Mad George gruesome effects are worth seeing this film, as it’s both horrifying and something that you can’t take your eyes off. The other thing that I liked was the acting. Yuzna does a very good job making sure he gets the performances to fit this film’s bizarre tone. He makes sure that there is chemistry between his cast because it made the dialogue scene work as I became engaged in the film while I waiting for something horrific to happen.

Arrow Video also does a great job with amount of extras on this disc. First, the film’s audio commentary track with director Brian Yuzna. This was a very good commentary track. There is a lot of information on the production of the film including some stories that happened on set. It’s worth checking out, if you’re a fan of this film.

Next there’s a couple of interviews. “Governor of Society” an interview with “Society” director Brian Yuzna. The interview goes into Yunza’s career and how “Society” was made. After that interview its “Master of the Hunt”, interviews with “Society” stars Billy Warlock, Devin DeVasqueaz, Ben Myerson and Tim Bartell. It was a good featurette that features stories from the making of the film and how it was like to work with Brian Yuzna. The interviews portions wrap up with “The Champion of the Shunt”, interviews with special effects artists Screaming Mad George, David Grasso and Nick Benson. A nice featurette that goes into detail about how the film’s effects including the film’s most notorious scene.

The disc wraps up with a Q&A session with Brian Yunza from 2014 Celluloid Screams Festival screening of “Society”, Brain Yuzna interview from the “Society” premiere, Screaming Mad George music video and the film’s official trailer.

This is one film that you should go out of your way to check out if your into gruesome body horror. With its great direction and original screenplay “Society” is one that I would join in an instant.