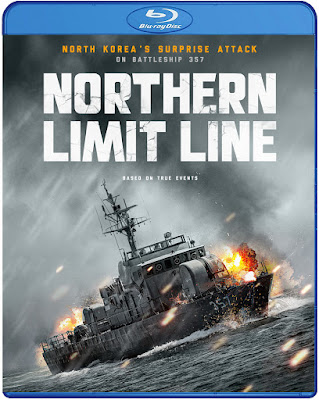 I found myself really liking this film. There is drama mixed with all the aspects of heroism, and the turmoil of going through a harden moment in history. Based on actual events. In 2002 on June 29th South Korea was celebrating their FIFA World Cup. Now North Korea sends two of their patrol boats into the border of the Yellow Sea which is a tight disputed border. And so begins an attack, The Battleship 357 was surprised, and attacked by their enemy. This ordeal in history is known as the Battle of Yeonpyeong. This battle, and this movie gives a great detail about the men who bravely fought and stood their ground at the Northern Limit Line.

Now the title Northern Limit Line refers to the border located in the water between North Korea and South Korea in the Yellow Sea. This movie has all the trademarks of being a memorable film about bravery, patriotism for your country against an attack. The 27 men on 357 stood their ground, fought and maintained their position and job. But it was more than just a job, it was protecting, and defending their home. 6 men died that day and 18 were wounded, but all of them in South Korea became heroes. I think what makes this film stand out is, you the viewer in a sense get to know the crew. You get to experience the training, the weapons, and most of all the attack.

This was directed by Kim Hak-soon and written by Chol Soon-jo. I think both of them created a great story, awesome imagery, and a retelling of a military event that caused death, and also a patriotism among the people. Now the movie is not without its flaws. There are moments that could have been added to further the character development, or explain certain situations. I feel one going into this will have to have some sort of knowledge on North and South Korea. For the layman going into this, might be confused, and not understand it all, so that is one of its flaws. I think the acting is spot on which is another one of its pluses. I think the storyline works even with as I have stated a little lack of explaining or character development. I think the direction works. There is a fast paced reality to the film. The special effects are awesome. The men are portrayed in a bravery that lovers of War films will take to.

All those in the acting was believable, and stood out as truly memorable characters. Starring Kim Mu-yeol as the character of Lieutenant Commander Yoon Young-ha, fantastic acting job. Lee Wan as Lieutenant Lee Hee-wan, another equally great job. Jin Goo as Sergeant Han Sang-gook another wonderful acting experience. Lee Hyun Woo as Corporal Park Dong-hyuk who gave another great performance. And all the other actors also owned there parts, and made you believe the situation happening.

The blu-ray extras is only a trailer and English subtitles. I would have liked to see some extras on the real situation that took place, extras would have benefitted this release. Well Go USA did a great job in picking this film to bring out on Blu-ray.

In the end I think the movie is something to watch and experience. I found myself liking it more than others. It has gotten many mixed reviews, and I can see where many of them are coming from, but I still feel the film is a worthy to watch, and experience for its dramatic action, and it’s telling of moment in maritime war history, between two countries that have been at war, and fighting for many upon many years. There is a tight tension that the movie does express, and I think that is another of its pluses. Solid acting, solid imagery, solid film to experience even with its few flaws.