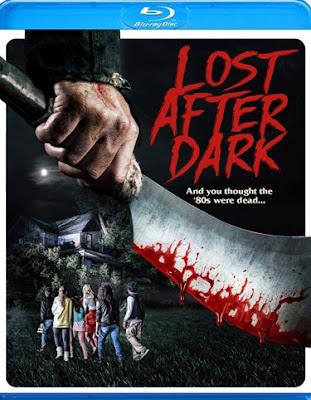 Every once in a while, I’ll come across a news story about a film that you never heard of but wanting to see it after hearing about it. This was the case with “Lost after Dark”. This film is a throwback to retro 80‘s slasher horror.

The film takes place in 1984, where an honors student (Kendra Timmins) joins a group of friends for some fun away from the school dance. Their fun plans take a turn for the worse when their car runs out of gas and they’re trapped on uninhabited road. But they manage to find a farmhouse so they can get help. But what is waiting for them is a sadistic cannibalistic killer that wants them as his next meal. Now they must find a way to outrun and survive the night before they end up dead.

Going into this film, I thought that this was going to be one of those run of the mill slasher films where you either end up liking or having hatred towards it. Never did I expect that this would feel like a grindhouse film with lots of gore and effects that make the film look like it was from the eighties. But I have to say, I was amazed that I had a lot of fun with this film.

One of things that I liked about “Lost after Dark” was Ian Kessner’s directing. One of the things that he does well is to make the scenes interesting and fun to watch. Whether it was the way he approaches the death scenes to making the performances feel campy, Kessner does a very good job making sure those are effective. If those weren’t effective, this could’ve been an average slasher at best. Thankfully, that wasn’t the case as those worked very well here. The other thing that I liked was the way that this had the feel of a grindhouse film. Whether it’s the effects used to make it feel like it was shot in the late seventies to early eighties to amount of blood is used, everything that feel that it was a lost film from that time period. It added to film and not become a hindrance. The screenplay written by Kessner and Bo Ransdell does a very good job building the suspense throughout. I liked, how they were able to do that by making sure the action isn’t rushed and focus on character development instead. It made me more interested in the characters as it focuses on them for most of the first half of the film. It setups for a very bloody and entertaining second half. The other thing that both of the writers did well was the way they were creative with the death scenes. There were a lot of them but it didn’t feel repetitive. It had the shock value that makes films like this play well with horror fans and it also helped that the scenes moved at a good pace from a story standpoint.

There have been many films that have tried the grindhouse approach but this is one of the better ones. With its very good directing and a screenplay that is effective, “Lost after Dark” is a fun slasher film that looked like it came from eighties.