Full Length "Back to the Future" Documentary "OUTATIME: Saving the Delorean Time Machine" to be Released in 2016 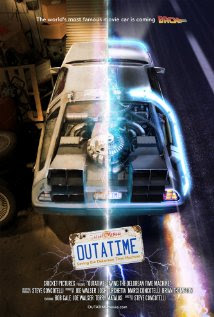 Cricket Pictures recently released information for their upcoming film " OUTATIME: Saving the Delorean Time Machine". The film is a documentary on the "Back to the Future" series.

It's currently availvible in short form on the "Back to the Future" 30th anniversary blu-ray set. The feature film version of the film will be released in winter 2016.

For more information on this film, you can visit the film's official website at:OUTATIMEmovie.com

Last week, the world over celebrated “Back to the Future” Day on Wednesday, October 21st, 2015. That’s the date when BTTF’s Marty McFly and Doc Emmet Brown traveled from 1985 Hill Valley to 2015 Hill Valley. That day is now officially history. But the Delorean Time Machine that propelled them there (as well as 1885 Hill Valley), thanks to the herculean efforts of a small group of dedicated “restorationists,” has been restored and preserved for fans last week, this year, and the next century. Come watch how a cultural icon went from 0 to 88 MPH again...

Fresh from its world premiere (with standing ovation!) at the BTTF “We’re Going Back” 30th Anniversary Fan Celebration (screened at the Hollywood United Methodist Church, where the legendary “Enchantment Under The Sea” Dance sequence was filmed), OUTATIME: Saving the Delorean Time Machine feature-length documentary will be released early next year across multiple platforms, including theatrical, digital delivery and home entertainment. While fans can currently view the OUTATIME featurette on Universal Studios Home Entertainment’s “Back to the Future 30th Anniversary” Blu-ray set, the OUTATIME feature length version goes deep into the challenges, frustrations and triumphs of bringing back an iconic prop from the junk heap of history. The announcement was made today by Executive Producer/Director Steve Concotelli.

“Screening the feature length version for the first time was incredible,” noted Concotelli. “I'm excited that Back to the Future fans can finally experience the untold story of the DeLorean Time Machine.”

“OUTATIME: Saving the DeLorean Time Machine” chronicles the efforts of BTTF co-creator Bob Gale, Universal Studios, and the film’s dedicated fan community as they work together to bring the original Time Machine back to life. Working closely with the Time Machine Restoration Team, Executive Producer Steve Concotelli was granted exclusive behind-the-scenes access for the multi-year restoration. Joe Walser (Head of the Restoration) and his team of experts had one singular goal – restore the car with 100% accuracy. Every bolt. Every detail. Exactly like it was in the original film. Concotelli also interviewed dozens of people involved with the restoration and the BTTF franchise - including Bob Gale, John Murdy, Michael Scheffe, Michael Lantieri, Claudia Wells, Joe Walser, members of the Restoration Team, fans, and more!