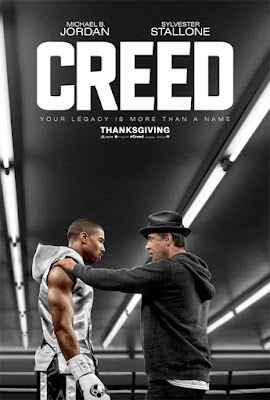 The seventh installment in the 'ROCKY' film franchise; this one focuses on the adult son of Apollo Creed, who's now being trained by Rocky. The movie stars Michael B. Jordan and Sylvester Stallone, as Creed and Balboa; and it costars Tessa Thompson, Phylicia Rashād (one of my biggest childhood crushes) and professional boxers Tony Bellew and Andre Ward. It was directed by Ryan Coogler (who also directed Jordan in his feature film directorial debut: 'FRUITVALE STATION') and it was written by Coogler and Aaron Covington. Being a 'ROCKY' fan, I really enjoyed the film; but it's not quite as good as all of it's critical hype (currently 93% on Rotten Tomatoes!).

Adonis Johnson Creed (Jordan) grew up a troubled child; always getting into fights, for no reason. He never knew his father, boxing legend Apollo Creed (Carl Weathers, in archive footage), or his birth-mother. He was raised by Apollo's widow, Mary Anne Creed (Rashād). Now, as an adult, Adonis dreams of becoming a fighter, like his father. He travels to Philadelphia, to meet Rocky Balboa (Stallone); his father's old rival (and friend), and asks him to train him.

The original 'ROCKY' is one of my all-time favorite movies! I've enjoyed all of it's sequels, as well (some quite a bit more than others). I was excited for this installment, and I really like the idea for the film; I was especially eager to see the movie, after hearing about all of it's rave reviews. Like I said, it doesn't quite live up to all of it's hype. I'd rank it about forth, among all of the 'ROCKY' films; but it's still a good addition to the series. It's classic Rocky, and Stallone gives another amazing performance, in the co-lead. He's still the star of the movie (even as just an elder trainer); fans should be pleased.
at 6:21 PM
Labels: Creed, Michael B. Jordan, Reviews, Sylvester Stallone, Warner Brothers