Want to Play "The Badger Game" on DVD & Blu-Ray 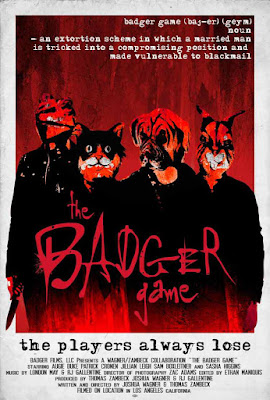 Special features on the DVD and Blu-Ray includes commentary track with the film’s actresses Augie Duke, Jillian Leigh and Sasha Higgins and a second commentary track that will highlight the film’s writers/directors Thomas Zambeck and Josh Wagner as well as Composer London May.

"The Badger Game" hits DVD & Blu-Ray on November 24th. The film is also available to view now on Hulu.

The Badger Game, the award-winning indie thriller, is set to be homeward bound this fall. Currently available on Hulu, the film will make its Blu-ray and DVD debut on November 24, 2015 on Severin’s Intervision label. To up the ante, the release will feature commentary with the film’s actresses Augie Duke, Jillian Leigh and Sasha Higgins. A second commentary will highlight the film’s writers/directors Thomas Zambeck and Josh Wagner as well as Composer London May.

The Badger Game is a twisted tale about infidelity and extortion, taking viewers on a harrowing journey, galvanized by wicked humor, violence, lust, suspense and unprecedented levels of cynicism.

Liam (Sam Boxleitner) is a successful advertising executive with money to burn and a healthy appetite for infidelity. Alex (Augie Duke) is his scorned mistress, hell-bent on revenge against the married man who wronged her. At first, the plan seemed simple: take Liam hostage and threaten to expose his indiscretion, lest he pay a healthy sum of money. But Alex knows she can’t do it alone. Enter her unhinged brother Kip (Patrick Cronen), exotic dancer Jane (Sasha Higgins), and desperate wallflower Shelly (Jillian Leigh). With the table set and the team in place, Liam soon finds himself held against his will - his perfect world about to crumble.? Forced to reckon with four mysterious captors and impossible odds, his only hope is to turn the quartet against each other and make it through the night alive.?

The Badger Game has impressed festival audiences across the country. Named official selections at the 2014 Arizona Underground Film Festival and the Twisted Celluloid Film Festival, the film won Best Drama honors at the 2014 Laughlin International Film Festival as well as Best Thriller, Best Supporting Actress (Jillian Leigh) and “Most Cool” awards at the Pollygrind V Festival.

In addition to its festival credentials, The Badger Game boasts an impressive pedigree behind the camera, including editor Ethan Maniquis (Machete) and sound mixer Rick Ash (Pulp Fiction). The film was written and directed by Thomas Zambeck and Joshua Wagner (Mimesis). Stadium Media is distributing it across digital platforms.
at 12:21 PM
Labels: Badger Films, DVD/Blu-Ray News, Intervision Picture Corp, The Badger Game