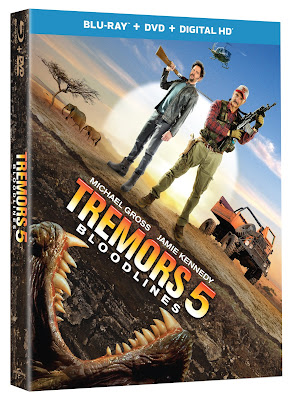 'TREMORS 5: BLOODLINES': Three and a Half Stars (Out of Five)

The fifth film in the popular monster flick series. It once again stars Michael Gross as Burt Gummer (the only actor to appear in all five films), and it costars newcomer (to the series) Jamie Kennedy. In this installment, Burt, and his new sidekick (played by Kennedy), must defend a South African wildlife reserve; from the deadly creatures. It was directed by Don Michael Paul and written by Woodrow Truesmith, M.A. Deuce, John Whelpley and C.J. Strebor. I found it to be a fun, and decently made, B-movie sequel.

The story takes place 14-years after the end of the third film (the forth installment is a prequel). Burt Gummer (Gross) is now hosting his own reality TV show, on survival skills. Travis Welker (Kennedy) is a fan of his, who wants to help him expand his business; he also becomes Burt's new cameraman. A man from the South African Wildlife Ministry, named Erick Van Wyk (Daniel Janks), finds Burt, and Travis, and asks them to come to Africa; to help them take care of an Ass-Blaster problem there. Burt is skeptical, but agrees to the job.

The first film is a classic (it's one of my all-time favorite monster movies); and I was pretty disappointed that the studios decided to go the 'direct-to-video' route, with all the sequels. I never expected them to get to a fifth installment though! I remember liking the other sequels, but not that much (I haven't seen them in a long time, and I don't really remember that much about them). Burt Gummer is a great character, and Gross is extremely likable in the role (next to 'FAMILY TIES', it's probably his most memorable part). It would be great to see Kevin Bacon and Fred Ward back in their parts too, but Kennedy isn't a bad addition to the franchise. I was actually pleasantly surprised with this chapter; it's funny and there's some pretty cool action scenes, and visuals in it, too. I like it.
at 9:33 AM
Labels: Reviews, Tremors 5: Bloodlines, Universal Pictures