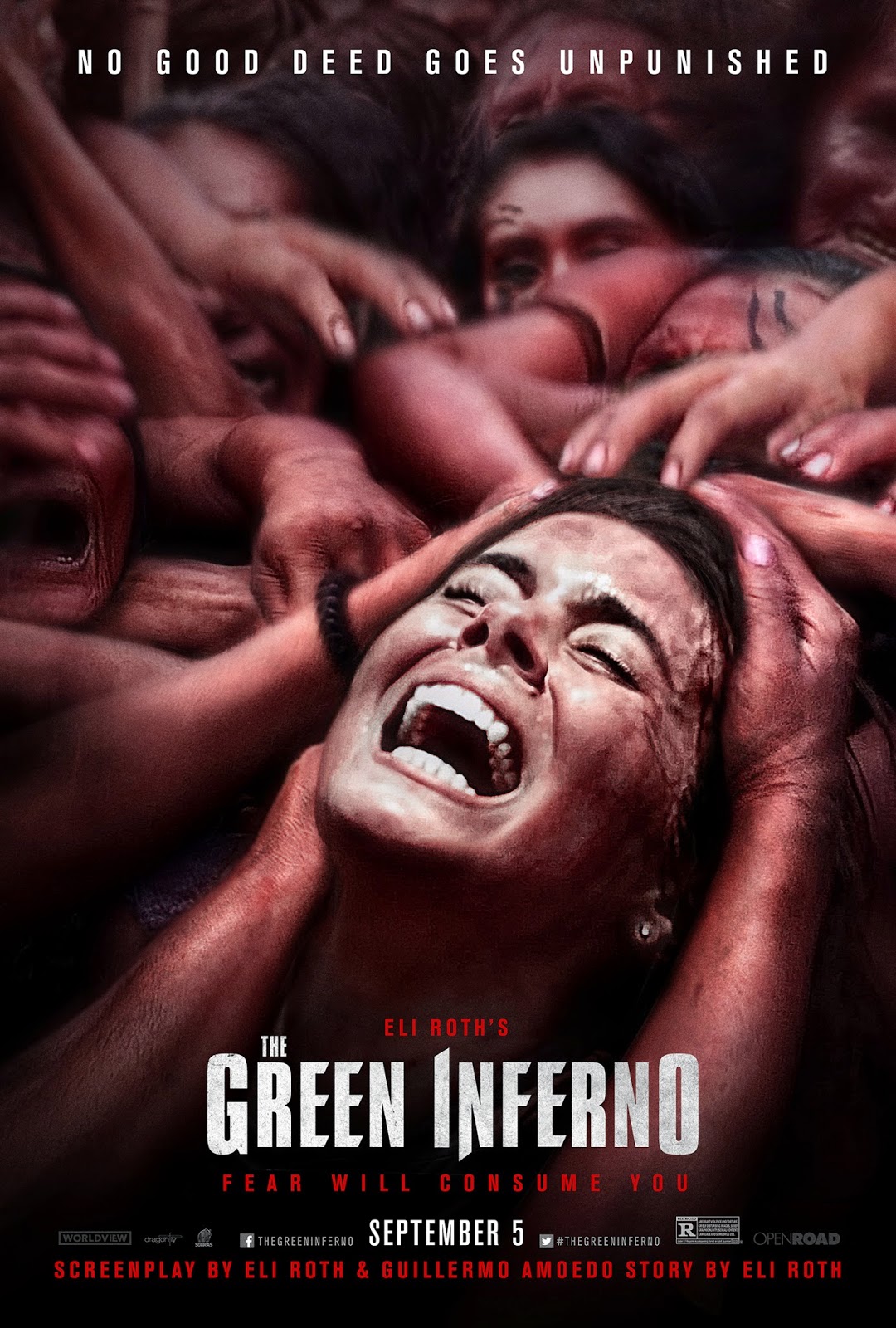 'THE GREEN INFERNO': Four and a Half Stars (Out of Five)

The new horror flick from director Eli Roth (the man behind such popular slasher classics as 'CABIN FEVER' and 'HOSTEL'). It was written by Roth and Guillermo Amoedo (who also co-wrote 'AFTER SHOCK' and the upcoming 'KNOCK KNOCK', with Roth and Nicolas Lopez). The film is about a group of college activists, who are attacked by cannibals in the Amazon rainforest. It stars Lorenza Izzo (Roth's wife), Ariel Levy, Daryl Sabara (of 'SPY KIDS' fame), Aaron Burns, Nicolas Martinez and Sky Ferreira. The movie was inspired by notorious Italian cannibal flicks, from the 70s and 80s, like 'CANNIBAL HOLOCAUST' and 'CANNIBAL FEROX'. It's not quite as good as those, but it is a nice throwback.

Justine (Izzo) is a New York City college student, who becomes fascinated by a campus activist group; and it's leader, Alejandro (Levy). She's invited to join the group, by a member named Jonah (Burns), and she reluctantly accepts. Alejandro has a plan to enter the Amazon rainforest, to stop a logging company from destroying all the land there, and thereby killing an ancient tribe. Once there, they become endangered by the people they went there to protect.

The movie is pretty slow-paced, at first, during all of the story and character development. These scenes are also really poorly acted and cheesy; but I wonder how much of that is the director's intent, and how much is unintentional. The second half of the movie delivers all of the promised shock and gore. It's maybe not quite as disturbing, as all of the hype promised it would be, but it's pretty close. It's also full of dark comedy (like all of Roth's films) and it's a great tribute to exploitation cannibal movies of the past. It's not as good as 'CABIN FEVER', 'HOSTEL' or 'CANNIBAL HOLOCAUST', but it's still pretty horrific and memorable. There's also some kind of a message, hidden in there, about misguided activism, and big business destroying everything; but it's not what the movie is really about.
at 3:27 PM
Labels: BH-Tilt, Eli Roth, High Top Releasing, Reviews, The Green Inferno