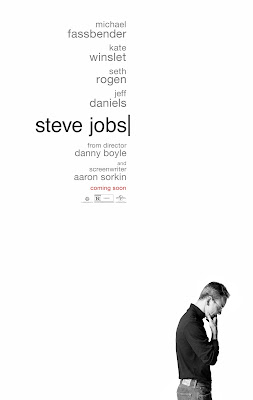 The new biopic about the life, and career, of Steve Jobs; the revolutionary co-founder of Apple Inc.. The film was directed by Danny Boyle and written by Aaron Sorkin; it's based on the 2011 biography book, of the same name, by Walter Isaacson. The movie stars Michael Fassbender as Steve Jobs; and it costars Kate Winslet, Seth Rogen, Jeff Daniels and Michael Stuhlbarg. It's received almost nothing but rave reviews, from critics, and it's also considered an early Oscar frontrunner; at next year's Academy Awards. I absolutely loved it!

The story plays out over three acts (that are all pretty close in running length); detailing three important new product launches, in the career of Steve Jobs (Fassbender). It begins in 1984, with the introduction of the Macintosh. The film then continues through 1988, with the debut of NeXT computer. It concludes in 1998, with the launch of iMac. We experience what Jobs was going through, involving everyone around him, during these three critical times in his career. The film especially focuses on Jobs' relationship with his daughter, Lisa (played by Peria Haney-Jardine, Ripley Sobo and Makenzie Moss).

A lot of people have compared this movie to 'THE SOCIAL NETWORK' (even going as far as to call it 'THE SOCIAL NETWORK 2'), and there are a lot of definite similarities. Both films were written by Aaron Sorkin (a genius screenwriter), and both tell the story of a similarly flawed, but very gifted man; who became an iconic revolutionist, in the technological world (and the world in general). Mark Zuckerberg and Steve Jobs are both very unlikable men; but they're also both very inspiring, and brilliant people. Both movies ask the question 'Can a great person, who accomplishes great things, also be a good, and compassionate, human being?'. The answer is obviously yes (at least in my opinion), but some would disagree; these films love to analyze that subject. I enjoyed 'THE SOCIAL NETWORK' more, but this movie comes pretty close to matching it (David Fincher was even set to direct 'STEVE JOBS', at one point!). This is definitely a big improvement over the 2013 'JOBS' film (starring Ashton Kutcher). It's one of those movies that everyone needs to see; and it's definitely one of the best films of the year, without question!
at 10:47 AM
Labels: Danny Boyle, Kate Winslet, Michael Fassbender, Seth Rogen, Steve Jobs, Universal Pictures