"Sleeping With Other People" Review - Written by Tim Hellman 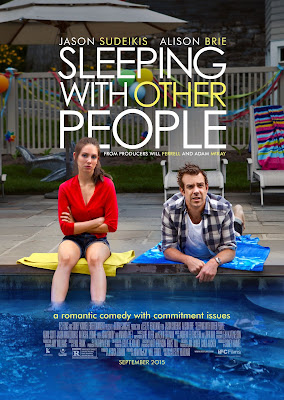 'SLEEPING WITH OTHER PEOPLE': Four and a Half Stars (Out of Five)

Romantic comedy flick, about two sex addicts; who try to maintain a good platonic relationship, while fighting off strong feelings for each other (of course). The film stars Jason Sudeikis and Alison Brie, as the leads, and it costars Adam Scott, Amanda Peet, Jason Mantzoukas, Andrea Savage and Natasha Lyonne. It was written and directed by Leslye Headland (who also performed both duties on the 2012 sex comedy flick'BACHELORETTE'), and it was made on a budget of just $1 million! I found it to be a somewhat routine, and predictable, romcom; but it's also filled with surprisingly touching moments, of intimacy and insight.

Jake (Sudeikis) and Lainey (Brie) met in college, as virgins, and lost their virginity to each other. Several years later they're both sex addicts, and run into each other at rehab. Jake now has a problem, committing to any serious relationships (while sleeping with every woman he finds attractive), and Lainey can't stay faithful to any guy she commits to. The two decide to form a friendship, and help each other out; with both sexual and romantic issues (the other one has). They also, of course, become strongly attracted to each other in the process.

The movie runs a pretty familiar path, at first, but then it becomes really interesting, involving and unpredictable; I thought it was going to end long before it actually did. All of the performances are good, and very funny; especially Sudeikis (Mantzoukas is a scene-stealer as well). I'm not a big fan of Brie (and I don't especially find her attractive either), but I still cared about her character. I wasn't a fan of 'BACHELORETTE', but I think Headland did an excellent job helming this film. It's very raunchy (like 'BACHELORETTE') and extremely witty (and hilarious at times), but it's also emotional and very touching. By the end of the film, it had definitely won me over!
at 2:41 PM
Labels: Alison Brie, IFC Films, Jason Sudeikis, Reviews, Sleeping With Other People