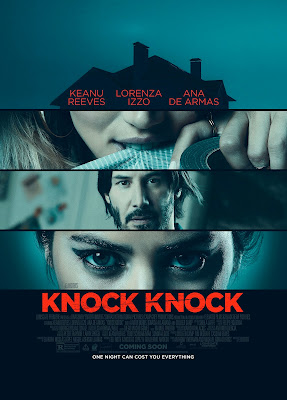 The new 'home invasion' torture porn flick, from director Eli Roth. It tells the story of a happily married architect; who's left home alone for the weekend, while his family is on vacation, and is visited by two seductive young women. He later learns that they want sex, as well as a lot more. The movie is a remake, of the 1977 B-movie thriller 'DEATH GAME' (written by Anthony Overman and Michael Ronald Ross); this updated screenplay was written by Roth, Guillermo Amoedo and Nicolás López (the same team that also wrote the recent slasher flicks 'AFTER SHOCK'and 'THE GREEN INFERNO'). The film stars Keanu Reeves, Lorenza Izzo (Roth's wife) and Ana de Armas. It's well made, but not nearly as memorable as Roth's other (more grisly) horror flicks!

Evan Webber (Reeves) is home alone for Father's Day weekend. His wife Karen (Ignacia Allamand), and children, went to the beach; for a planned family vacation. Evan stayed home to nurse an injured shoulder, and catch-up on work. While working, and smoking a little weed, he gets an unexpected visit; from two much younger women, named Genesis (Izzo) and Bel (Armas). The girls have been out in the rain, for apparently quite a while, looking for a party. Evan lets them come in and dry off; as he also calls them a cab. When the two women attempt to seduce Evan, he has a very hard time resisting; and things only get worse from there.