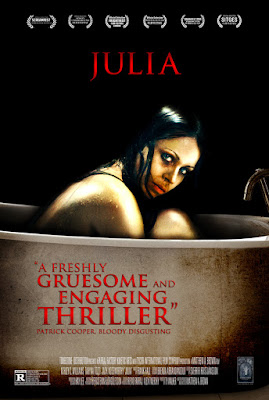 If feels like it’s been a while since I’ve reviewed a film that has premiered on VOD or in theaters as most of my reviews have been from DVD releases. When I came across “Julia”, I was interested in watching this film from seeing the film’s trailer. It also helps that it has played at such film festivals such as Screamfest, Buffalo Dreams Fantastic Fest and SItges Film Festival which I’m sucker for when choosing to review a film.

The film is about Julia, a woman (Ashley C. Williams (The Human Centipede)) who is assaulted by a group of men after a night out. She begins to experience serious trauma over the ordeal. Things begins to look very down for her until she comes across a woman (Tahyna Tozzi) who introduces her to a therapist who has a new form of therapy to help her through her trauma. Instead, this therapy makes her want to take revenge against the group who assaulted her. Now, there is no stopping her thirst for vengeance.

Going into this film, I was expecting this to be one of those “I Spit on Your Grave” type films where there were going to be an endless amount of horror. Instead, this film felt like more of a psychological/occult film with substance which it’s a good thing in this case. The direction from Matthew A. Brown was very good. One of the things that I liked about it was the fact everything had a dark and gloomy look to it. Whether it was the way the scenes looked onscreen to how some of the lighting was used, it gave a very dark and dreadful feel to it. It works so well here because of the film subject matter. The other thing that makes the direction good was the way that Brown makes sure the performance are on par with the film’s dark tone. He makes sure he gets the performances that he needs to make this aspect work so well with the context of the story. The performances is what help this film interesting and entertaining.

Speaking of the screenplay, I thought it was good considering it felt a little slow at times. What I liked about Brown’s screenplay was the way that it focuses on the film’s main character. From the time we meet the main character riding on an escalator in the beginning to the final frame, the screenplay does a very good job focusing the main character and how the character differs from beginning to end. The other thing that I liked about this was the fact the tone was dark throughout. Whether it was the way the scenes were written to how each of the characters were dark, it helped maintain the serious tone in the story that its needed for the whole thing to work.

If there was one problem that I had with this film, it was the fact that a couple of scenes dragged on especially in the doctor’s office. I wished that was touched briefly, but still it’s only a minor grip instead of a major one as this was a good film. Check this shocking psychological thriller as it’s very good. “Julia is a very dark psychological thriller that thrives on its direction and Ashley C. Williams’ performance.