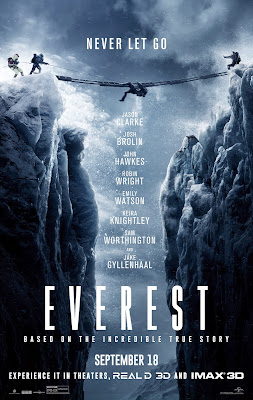 'EVEREST': Three and a Half Stars (Out of Five)

The film takes place in 1996; and follows a very experienced mountain guide, named Rob Hall (Clarke). Gyllenhaal plays Scott Fischer; another very skilled guide, who led another group up Everest. Other climbers included a doctor named Beck Weathers (Brolin), and a mailman named Doug Hansen (Hawkes). The movie details their disastrous attempts, to reach the summit that spring (and come back down), as well as many others.

The first half of the movie is extremely slow-paced, it did help me to get to know, and care for, a lot of the main characters though. The second half of the film is both suspenseful and visually spectacular (it especially looks beautiful in 3D). It's also pretty depressing; and I was surprised to learn which characters survived, and which didn't. The directing is decent, and I like most of the main cast (especially Gyllenhaal). It's not the most consistently thrilling adventure flick, but it is entertaining enough.
at 11:25 AM
Labels: Everest, Jake Gyllenhaal, Jason Clarke, Josh Brolin, Keira Knightley, Reviews, Sam Worthington, Universal Pictures