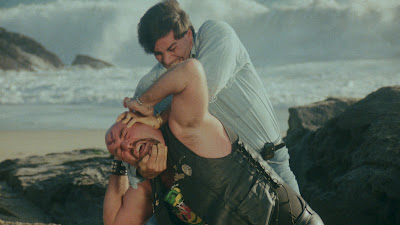 Drafthouse Film recently send us over information that they've acquired the cult film "Dangerous Men". The film was originally released in 2005 with little to no fanfare in California theaters.

Drafthouse Films, the curatorial force behind exceptional repertory releases such as the ninja-blasting synth-rock monolith Miami Connection, the psychedelic sci-fi brainmelter The Visitor, and the most dangerous movie ever made, Roar, have announced the acquisition of their latest cult sensation, Dangerous Men, following a packed-house screening of the film at Fantastic Fest.

The fanatical brainchild of Iranian polymath John Rad, Dangerous Men is a passion project that remained in obsessive production for nearly two decades before finally debuted in Californian theaters in 2005. An unflappably prodigious creative force, Rad handled much of the technical duties of the film, appearing multiple times in the film's credits as the director, writer, location scout, producer, executive producer, and more.

Despite initially languishing at the box office during its limited theatrical release, and never finding a likeminded audience before Rad's untimely death in 2007, Dangerous Men developed a devoted following before vanishing as mysteriously as it appeared. Chief among them was Hadrian Belove, of the independent Los Angeles theater The Cinefamily, who saw the film multiple times during its brief theatrical run, and alerted Drafthouse Films and Alamo Drafthouse Cinema programming teams to the existence of the film. Working with the late artist's family, the team worked tirelessly alongside the American Genre Film Institute to locate and restore the original film.

"It took us almost three and a half years of continuous begging, pleading and debasement before John Rad's family agreed to license us the film," said Drafthouse COO James Emanuel Shapiro. "It was well worth it! We are immensely proud that we've carved out our own niche of mind-shredding repertory releases and beyond thrilled to unleash what should very much be considered the Holy Grail of Holy F*cking Sh#t on audiences worldwide!"

Dangerous Men will storm screens nationwide starting Friday, November 13th, and will hit multiple video on demand platforms in December. A home video release on Blu-ray, DVD and VHS is planned for early 2016.