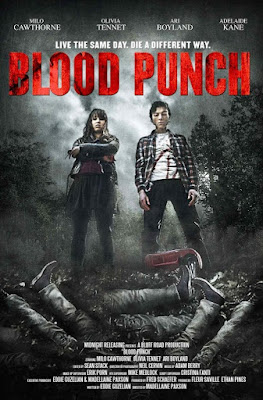 I didn’t know what to think about of “Blood Punch” when I first heard about it. Was this a horror film, thriller or something else? Still I wanted to check this film out because it had a good trailer plus I was very curious to seeing what type of film this is.

“Blood Punch” follows Milton (Milo Cawthorne), a chemistry student who is stuck in rehabilitation for a drug addiction. He meets a new girl named Skyler (Olivia Tennet). When her boyfriend Russel busts her out, Milton decides to go with them. They go to a remote hunting cabin to hide out there. Soon Milton gets himself in a dangerous love triangle as he starts to fall in love with Skyler. Soon, the two kill Skyler’s boyfriend but wake up the next morning to find out that Russel is still alive. Now as the bodies start piling up, Milton must find a way of this dangerous situation of the mess he’s in.

It’s amazing that some of the most twisted films that I’ve seen have had “Blood” in the title. Don’t get me wrong, they’ve also been good films too. You have Charles Band’s “Blood Dolls”, the dark horror comedy “Blood Car” and the outrageous “Blood Soaked” which I saw last year. “Blood Punch” would fit with those films as well. It’s a very twisted film that walks the fine line of horror, dark comedy and weirdness. Still, I like this film a lot more than the ones I mentioned. Most of it had to with the film’s direction. Director Madellaine Paxon does a very good job making sure the direction was very good. I’ve seen films where the story becomes bizarre and the direction of the film becomes confusing or flat. This wasn’t the case here, as the direction was very good and the film wasn’t confusing to follow. She makes sure the scenes keep moving through her direction. Whether it’s the way the film was directed to how every scene had a twisted feel to it, it help make the film interesting and fun to the point that it kept me interested considering it went a little too long.

Paxson also does a very good job making sure the performances were very good and entertaining. It helped that Milo Cawthorne, Olivia Tennet and Ari Boyland worked together before on the kids show “Power Rangers R.P.M.”, as they had very good chemistry with each other and made their characters entertaining and interesting. This was the most surprising thing about this film, as I thought it would the weakest part of the film. Instead, it’s the strongest part of the film.

The screenplay written by Eddie Cuzelian was also very good. I liked how the story wasn’t confusing given the film’s twisted nature. He does a very good job making sure the story didn’t go too far off into the bizarre that you would lose sight of. Whether it was the way the dark humor was inserted to how weird the characters got, it makes sure that everything is clear at the end so that you’re not left wondering what’s going on or how it makes sense.

Going into this film, I didn’t know what to expect. Thankfully I decided to check this film out, as this was a thrilling ride. With its very entertaining performances and good directing, “Blood Punch” is one strange trip to the woods that you’ll enjoy.