Blood in the Snow Film Festival Announces its 2015 Lineup 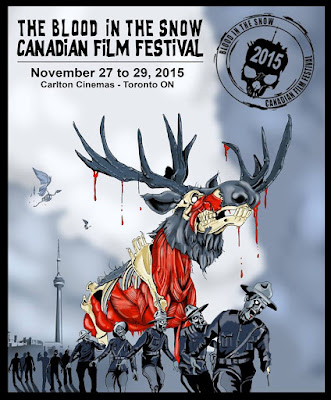 The orgainizers of the Blood in the Snow Film Festival recently send us information on their lineup for this year's festival. Films includes the World Premiere of NIGHT CRIES by director Andrew Cymek (DARK RISING/ SUMMER VALE series)., the Toronto Premiere of Larry Kent’s controversial SHE WHO MUST BURN (winner of Best Canadian Feature at Fantasia Fest 2015), the Canadian Premiere of FARHOPE TOWER by April Mullen DEAD BEFORE DAWN 3D/ 88) and we are closing the festival with the Toronto Premiere of BITE from Chad Archibald (THE DROWNSMAN).

For more information on this festival, you can goto: http://bloodinthesnow.ca/

Highlights in this year’s lineup include the World Premiere of NIGHT CRIES by director Andrew Cymek (DARK RISING/ SUMMER VALE series)., the Toronto Premiere of Larry Kent’s controversial SHE WHO MUST BURN (winner of Best Canadian Feature at Fantasia Fest 2015), the Canadian Premiere of FARHOPE TOWER by April Mullen DEAD BEFORE DAWN 3D/ 88) and we are closing the festival with the Toronto Premiere of BITE from Chad Archibald (THE DROWNSMAN).

The Festival runs this year from November 27 to the 29th, 2015 at the Carlton Cinemas in Toronto ON. Its 13 programs of features, seminars and shorts will highlight the best in contemporary Canadian genre cinema.

Festival passes are only $75 and advanced tickets for $11 each are now on sale: https://www.universe.com/events/blood-in-the-snow-canadian-film-festival-2015-tickets-toronto-GVYT6

A team of Paranormal Investigators venture into the infamous Farhope Building with the dreams of landing a TV deal, but get more than they bargained for when they come up against the most powerful spirits they’ve every faced. Once inside the building the spirits begin manipulating the team members, and the higher they climb the more everything spirals out of control.

with the short film “Chiral” (11 min) Dir. Karen Lam CANADIAN PREMIERE An anxiety-ridden art dealer (Nelson Leis) confronts a thief (Vanessa Walsh) at his art gallery reception, only to come face to face with his own Shadow Self.

After his world crumbles, Joseph will stop at nothing to find his wife while battling demons, psychopaths, and the ruler of this new apocalypse... a warlord known only as The Hat.

with the short film “Grace” (10 mins) dir. Karen Nielsen CANADIAN PREMIERE A young girl, her dog and a stranger find themselves trying to hold onto their humanity when stranded together in a post apocalyptic world.

Saturday November 28 “PLEASE LIKE MY FILM: A Marketing for Distribution Seminar” – 3:30 pm

In an ever-crowded marketplace it is more and more it is up to the filmmakers to market their films. Join us for a round table discussion about how you can position your film best both to attract distributors and to get your films out to the public. Join us for a panel discussion with Susan Curran (Director of Marketing at Anchor Bay Canada/ Starz Home Entertainment), Avi Federgreen (Producer and Owner of IndicCan Entertainment), and filmmaker Gavin Michael Booth (“The Scarehouse”).

Haunted by a terrifying spirit out of her graphic novel, a young artist struggles to overcome her psychosis before it destroys her.

A young girl's dream of becoming the savior of mankind by giving birth to the devil comes alive in this tribute to silent-era horror.

A lonely, conflicted hobo lives an existence defined by a dark, insatiable need. On this day, he crosses paths with a mysterious man who's also defined by an all-consuming, singular drive.

When Hallowe'en is hijacked by a Japanese doomsday cult, a girl and her siblings are forced to flee into the harsh conditions of winter.

A young couple purchase their new home to start a life together, only to find out the elderly couple next door have other plans for them.

“Marty” (16 mins) WORLD PREMIERE Dir. Gregory Fox A traveling salesman reveals himself as a psychopath when he tries to fill the void his parents left.

A man returning from a business trip saves a teenage girl from drowning. She disappears a few moments later, leaving the man quite shaken. His girlfriend tries to cheer him up, but she disappears too, when the teenage girl suddenly comes back.

After a supermodel is bitten in the water by a mysterious creature while on a photo shoot at the beach, an infection takes hold that changes her behaviour and appearance. Over time she turns into one hell of a demonic sea siren whose thirsty for blood.

Five female filmmakers en route to screen their new horror film in Los Angeles, experience their own real life terror when they cross paths with deranged scientist hellbent on using them for his mysterious experiments.

Two friends try to survive an encounter with a couple of backwood cannibals.

A Horror/Comedy that tells the story of a group of eccentric college kids, struggling to get through the hectic exam period. A liquor filled party is planned with them adding a Secret Santa exchange for fun. Little do our characters know… a killer is in town and has a special present for all the good (and bad) girls and boys. Dare to open your present? It might be your last!

Carolers out to spread Christmas cheer get more than they bargained for at Mabel's house. Sunday November 29

One of the keys to any great horror film big or small, is the bloody makeup effects. Join us for unique discussion with some of the top Special Effects Makeup artists in Canada today. They will talk about their experiences making indie movies and their tricks of the trade. This will follow by a practical special effects makeup demonstration by Ryan Louagie of “The Butcher Shop”.

“She Who Must Burn” 2:00 pm TORONTO PREMIERE Dir. Larry Kent

The Baarkers, a family group of religious fanatics who believe they are God's chosen ones, polarize a town and force it's residents to fight for their lives as their zeal turns murderous and the rule of law decays into brutish mob mentality.

with the short film “Crazy Love” (12 mins) Dir. Helena Marie TORONTO PREMIERE Pushed to her breaking point, an abused woman must decide whether to stay silent or fight back.

The postproduction process is one of the most important but least understood and least planned stage for filmmakers. Join us for an in-depth panel with leading sound designer/mixer George Flores, composer Steph Copeland and filmmaker and editor Justin McConnell that will discuss with you the best way to plan your postproduction on your next film.

Four men head into the remote woods on an annual camping trip. As one of them gradually loses his mind, the weekend of fun takes a turn for the worse and the other three must fight for their lives.

with the short film “And They Watched” (7 mins) Dir. Vivian Lin TORONTO PREMIERE

AND THEY WATCHED is a horror morality tale about the custodian of an electric chair and its last casualty. Inspired by the recent reinstatement of the electric chair in Tennessee, US.

with the short film “A Tale of the Bonesetter” (11 mins) Dir. Brett Kelly TORONTO PREMIERE

A woman and her child visit a Bed and Breakfast in rural Quebec unaware of the town's history of child murders at the hands of an ancient Bonesetter.
at 10:38 AM
Labels: Bite, Blood in the Snow Canadian Horror Film Festival, Film Festival News, Save Yourself