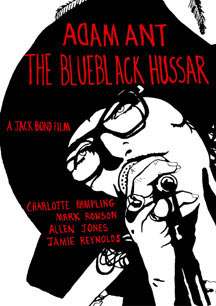 Sunrise Picture recently send us information for the upcoming DVD release of the music documentary "The Blueblack Hussar". The documentary focuses on the current persona of singer Adam Ant.

This Sunrise Pictures production was described as, "Amazing and wonderful", by Jimmy Page of Led Zeppelin and, "Up there with Pennebaker and the Maysles Brothers", by Sam Dunn, BFI. The film's Director, the renowned Jack Bond, captures this true icon's extraordinary and brave comeback, after years of mental health problems. The 99 minute film comes packaged with bonus features like rare live performance footage, and a Q&A with Jack Bond hosted by journalist John Robb. The trailer can be seen here: http://youtu.be/lZ2d3TwWVLo

The Blueblack Hussar is Adam's latest persona and, so emboldened, he embarks on his first tour for 15 years with a new backing band, 'The Good, the Mad and the Lovely Posse'. For the first time since his Punk roots, Adam is captured playing with a young, hungry band, and collaborating with the likes of Boz Boorer (Morrissey, The Pole Cats, etc). The film includes electrifying live performances, starting at London's 100 Club and culminating at Hyde Park, before an audience of 55,000. Jack Bond's 'fly on the wall' direction includes intimate scenes of Adam at home, backstage and even getting a new tattoo. The film exposes Adam's complex personality through the characters he interacts with on his journey, who include Amy Winehouse producer, Mark Ronson, Jamie Reynolds of The Klaxons and the legendary Pop Artist Allen Jones ('A Clockwork Orange'), Adam's art student days' mentor.

The film takes in the atmosphere pervading Adam's life in London, including that explosive show at the 100 Club. The Blueblack Hussar also follows his escape to Paris to record with his 'Bardoesque' backing singer, Twinkle and the enigmatic film star, Charlotte Rampling, who inspired his first album, 'Dirk Wears White Sox'. Jack Bond, one of Britain's most innovative directors, returns to the Cinema Verité roots of his ground-breaking 1965 film, 'Dali in New York' to portray the creative talent of Adam Ant, another 'mad genius'.

Jack Bond himself is an English Director/Producer of feature films and television documentaries, including films on Salvador Dali, Roald Dahl, Patricia Highsmith, Werner Herzog and The Pet Shop Boys. Three of his feature films: 'Separation', 'Anticlock' and 'The Other Side of the Underneath' have been re-released on DVD and Blu-ray by the BFI. Jack Bond is to be the subject of a biography by Kirk Lake ('There Will Be Rainbows', a biography of Rufus Wainwright) and is currently working on a new feature film.

The Blueblack Hussar is an honest - at times excruciatingly so - portrait of a troubled, but ultimately triumphant natural talent. The years may have marched on but Adam Ant, as this unflinching film proves beyond doubt, remains a true star.
at 10:38 AM
Labels: Documentary, Music Documentary, Sunrise Pictures, The Blueblack Hussar