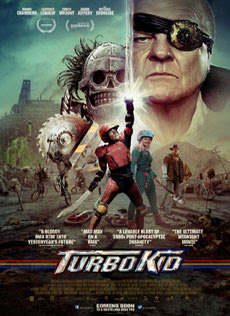 'TURBO KID': Four and a Half Stars (Out of Five)

A post-apocalyptic action/sci-fi/horror flick; about an obsessive comic book fan, that takes on the identity of his favorite character, to fight an evil tyrant and save the woman he loves. The film was directed and written by debut feature filmmakers François Simard and Anouk and Yoann-Karl Whissell. It stars Munro Chambers, Laurence Leboeuf (no relation to Shia), Michael Ironside, Edwin Wright, Aaron Jeffery and Romano Orzari. I loved it.

The movie takes place in a post-apocalyptic future world (in the year 1997). The Kid (Chambers) is an orphaned comic book fan, that travels around on his BMX bike; searching for valuables to trade in for water (which is extremely rare). He befriends a quirky girl, named Apple (Leboeuf), and the two are eventually stalked by a sadistic madman, named Zeus (Ironside), and his followers. The Kid discovers an ancient weapon, much like the one his favorite comic character possesses, and uses it to try and imitate his hero; in order to save Apple, and himself, from the evil tyrant.

The film is definitely strange and extremely unique; which I always respect in movies. It's also funny, quirky and full of great stylized gore. The performances are all decent enough (especially Ironside and Leboeuf, who are both scene-stealers in it) and the trio of filmmakers makes a very impressive directorial debut. It's a great retro 80s throwback flick; for fans of horror, sci-fi and post-apocalyptic thrillers!
at 1:13 PM
Labels: Epic Picture Group, Reviews, Turbo Kid