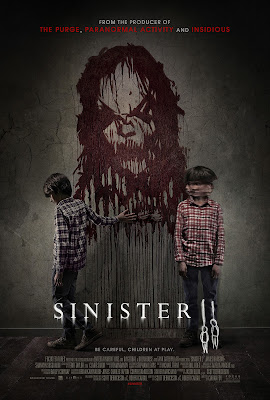 'SINISTER 2': Three and a Half Stars (Out of Five)

Sequel to the 2012 horror hit 'SINISTER'; about a family haunted by a demon, called Bhughul, through the ghosts of murdered children, using super 8 snuff films. This installment picks up where the last one left off, with a new family being terrorized by Bhughul. The movie was directed by Ciaran Foy and written by Scott Derrickson (the director of the first film) and C. Robert Cargill (the duo also wrote the first movie, as well). It stars James Ransone (who also costarred in the original flick), Shannyn Sossamon, Robert Daniel Sloan, Dartanian Sloan and Lucas Jade Zumann. I enjoyed it, although not quite as much as the first film.

A mother, Courtney (Sossamon), and her twin sons, Dylan (Robert Daniel Sloan) and Zach (Dartanian Sloan), move into a countryside farmhouse. They're on the run from Courtney's abusive husband, Clint (Lea Coco); who has hired people to search for them. Dylan is having continuous, horrific, nightmares; and begins seeing the ghosts of dead children. These spirits are led by a kid named Milo (Zumann), who starts showing Dylan Super 8 home movies; of families being brutally murdered. Ex Deputy So & So (Ransone), who investigated the crimes in the first film, shows up and tries to help the family.

This film has a lot bigger budget than the first movie, $10 million compared to $3 million, so the productions values are a lot better. It looks cooler, and the nightmarish gore scenes are at least as well made as the original installment (if not better). It is lacking Ethan Hawke (the star of the first film) and Derrickson at the helm; Foy shows decent talent here, but he's definitely not as skilled as Derrickson (yet). The movie has some really creative and haunting horror imagery and atmosphere, but it is slow paced and not that involving. It's a decent enough sequel though.
at 10:07 AM
Labels: Focus Features, Reviews, Sinister 2