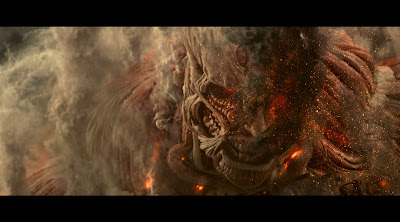 Funimation Entertainment recently send us over information for the new manga adaptation of "Attack on Titan". The film is directed by Shinji Higuchi, who is currently wrapping Toho’s new Godzilla film.

For more information and tickets for all ATTACK ON TITAN playdates are now available for purchase via the movie’s official website AttackOnTitanTheMovie.com.

FUNimation Entertainment announces the new unrated manga adaptation feature film ATTACK ON TITAN for a limited theatrical release, screening in nearly 300 theaters across the United States and Canada. In the U.S., Part 1 plays in theaters on September 30, October 1, and October 7, with Part 2 opening two weeks later on October 20, 22 and 27. In Canada, Part 1 will play in theaters on October 5 and 26 followed by Part 2 on October 22 and October 26. Tickets for all ATTACK ON TITAN playdates are now available for purchase via the movie’s official website AttackOnTitanTheMovie.com.

“The day ATTACK ON TITAN fans across North America have been waiting for has finally arrived. This is a limited theatrical release so I encourage fans to find their nearest theater and purchase tickets to both movies now,“ said Gen Fukunaga, CEO and founder of FUNimation. “A movie as colossal as ATTACK ON TITAN truly takes two parts to tell. Fans do not want to miss this opportunity.”

Produced by Japan’s legendary Toho Company (home of Godzilla, Mothra, etc.), the unrated ATTACK ON TITAN live-action adaptation, based on the popular graphic manga series of the same name (“Shingeki no Kyojin” in Japanese), tells the dark story of a violent world where most of humanity has been destroyed by terrifying brutal giants. The last of mankind now fights to survive behind three concentric walls – walls that were once impenetrable to the horrific giants. With more than 50 million copies in print today, ATTACK ON TITAN has also inspired four spin-off manga, as well as a 25-episode anime series which FUNimation both simulcast and released on home video in North America.

“We wanted to make sure that we could bring ATTACK ON TITAN to as many fans as possible, and we’ve put together a great network of theatrical partners to do just that,“ said Mike DuBoise, COO of FUNimation. “That said, we know ATTACK ON TITAN will draw people new to anime, as well as fans of horror and sci-fi. As we’ve seen from the tremendous response at festival screenings, this movie does not disappoint.”

Horror, sci-fi and fantasy fans have eagerly been waiting to see ATTACK ON TITAN on the big screen, following its standing-room-only World Premiere in Los Angeles on July 14 and its two quickly sold-out screenings this summer at Montreal's premier Fantasia Film Festival. Genre buffs and film critics have been screaming praise for ATTACK ON TITAN, with horroronscreen.com declaring “ATTACK ON TITAN is the most impressive giant monster movie to come out in years,” and Brutal Beta raving, “When the Titans show up, it’s downright scary. Totally horrifying. I was crawling out of my skin.”

Further appealing to followers of such fear franchises as THE WALKING DEAD and movie blockbusters like WORLD WAR Z, The Other View exclaims, “This genre-mixing spectacle becomes relentlessly bleak and gory, like a zombie flick operating on the grandiose scale of a disaster film,” while the South China Morning Post notes, “The looks of the Titans are creepy and disturbing. Plus watching them eat humans...will give you nightmares.”

The official movie website features an easy-to-use theater locator and the recently released theatrical trailer. The previous trailer, released in August, has been viewed more than 10.3 million times. You can see it here: http://tinyurl.com/attackontitantrailerone

For more information on the ATTACK ON TITAN live-action movies, to find theaters or to purchase tickets, please visit AttackOnTitanTheMovie.com. Tickets are limited. Like FUNimation on Facebook at www.facebook.com/funimation and follow the company on Twitter at twitter.com/funimation.
at 12:25 PM
Labels: Attack on Titan, Film Screening, FUNimation Entertainment, News